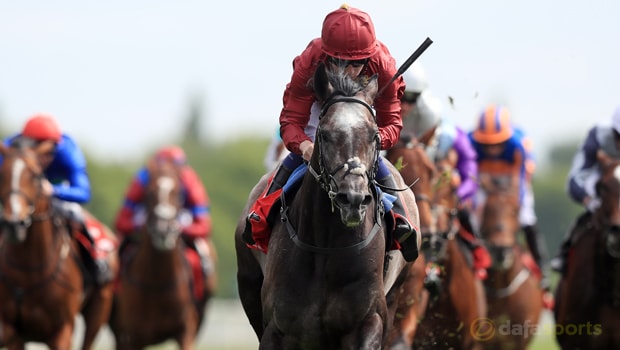 Oisin Murphy is excited at the prospect of riding “genuine chance” Roaring Lion in Saturday’s Derby at Epsom.

Murphy feels Roaring Lion should handle Epsom and is keen on another crack at Saxon Warrior and Ryan Moore, having agonisingly gone down against the pair in the Racing Post Trophy at Doncaster last term.

Saturday will be his fourth Derby ride and he has come closest when fifth last year on Benbatl and also in 2014 aboard rank outsider Red Galileo.

He feels the John Gosden-trained Roaring Lion has plenty in his favour after an impressive win at York this month.

“He’s beautifully balanced and is a very well-made horse. He’s in good form and the performance at the Dante meeting was very good. Hopefully he’ll run very well.”

Going into the Premier Classic with a live contender is a big thrill for Murphy and he is keen to make the most of it.

“It’s a great opportunity. Everyone wants to ride in the Classics and to have a genuine chance of winning one is fantastic,” he added.

“I’ve had three previous rides in it, it’s ultra-competitive and the most important race in Europe alongside the Arc. It’s exciting. It’s been a lucky meeting for me and it would be great to have a winner there again.”

His ride in the Racing Post Trophy came in for some criticism, with Murphy himself self-critical in the aftermath suggesting he had perhaps gone for home too soon, allowing Moore to run him down late on. However, he does not intend to allow the critics to get to him.

“You have to be so level-headed. I’ve gone into races before – important races – and things didn’t work out and you have to deal with that.

It’s easier said than done,” he added. Roaring Lion is 7.00 to win the Derby at Epsom, while unbeaten Saxon Warrior is 1.80.