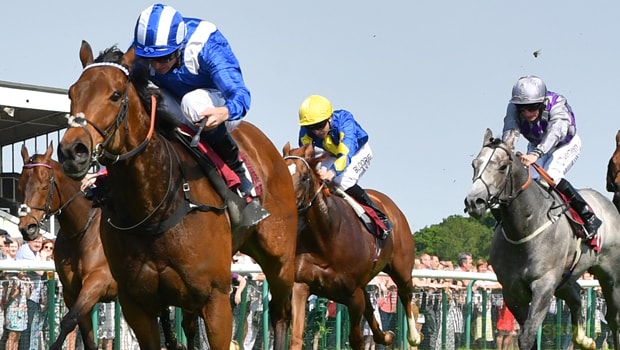 Connections of both Battaash and Lady Aurelia are confident of big performances in the eagerly-anticipated King’s Stand Stakes on day one of Royal Ascot.

The latter won the King’s Stand last year and is chasing a Royal Ascot hat-trick, while Battaash is heading to the Berkshire track for the first time.

Hills knows that getting Battaash to settle in the preliminaries could be the key, as he got too worked up at York last summer and proved no match for Lady Aurelia, who was gunned down on the line by Marsha in the Nunthorpe.

Battaash showed his metal when comprehensively beating Marsha to win the Prix De L’ Abbaye at Chantilly on his next start. “You never quite know with Battaash,” Hills told Racing UK.

“The stables are a little bit away from the racecourse so we’ll probably just try and get him up there while the race before is running, and then just put him in a quiet box – just down the end.”

He is full of respect for Ward’s brilliant filly, but quietly confident his charge merits a tilt at the prize.

“Lady Aurelia’s a very good filly and she’s unbeaten at Ascot, so she’s going to be a hard nut to crack,” he added.

“But I’m pretty happy. Battaash is in good form and his work was very good (on Saturday).

You just need things to go right in the sprints.” For Ward, there are no concerns despite his daughter of Scat Daddy being turned over in her prep race in the US.

“Her last few works have been very, very good. She’s an older mare now and came in this year heavier,” said the American trainer.

“She was beaten in her prep – she was second – but she ran a really good race. She’s ready to run big. I’m very excited.”