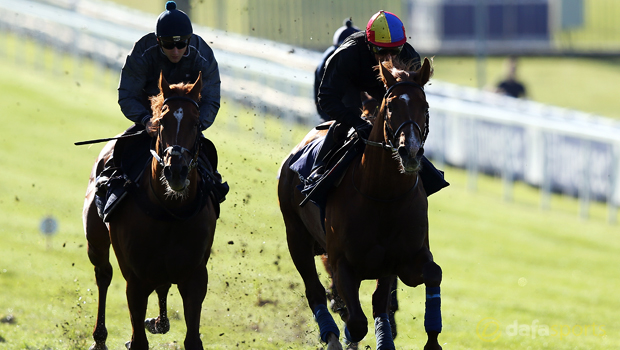 John Gosden declared himself pleased having watched Derby hopeful Wings Of Desire get to grips with the Epsom track at the ‘Breakfast With The Stars‘ event on the Downs.

Unraced as a two-year-old, Wings Of Desire has made rapid progress this season to thrust himself into the Classic picture ahead of the June 4th contest.

He got off the mark at Wolverhampton in April on the all-weather before following up in impressive fashion winning a key Derby trial in York’s Dante Stakes this month.

Gosden completed the Dante/Derby double a year ago with Golden Horn and he was pleased to see that Wings Of Desire had travelled nicely during a workout on Epsom’s undulating track.

The Clarehaven handler feels it bodes well for June 4th and he said jockey Frankie Dettori was positive afterwards.

“Frankie loved the way he came down the hill. He changed his legs down the straight and picked up when he wanted to,” said Gosden.

“He has learnt a lot. He has got a cool mind on him and I like the way he was business-like.

“I just wanted to go half-speed down the hill and not canter down it as they can get on the wrong leg.

“The horse did it nicely. We had not come here to do a flat-out piece of work, we came here to learn about the track.”

Gosden said that Wings Of Desire had missed out on most of his juvenile campaign, failing even to muster full speed work at home.

This season has been a revelation however with the experienced trainer labelling his progress as ‘freakish’.

“I think it is unusual what he has done. Most have an education at two years old – they might have worked and not raced, but in his case he missed it all.

“From coming off a canter in March to winning a Dante is freakish,” he added. Wings Of Desire is 4.50 to win the Derby at Epsom.