Posted by chris schweizer on September 28, 2015 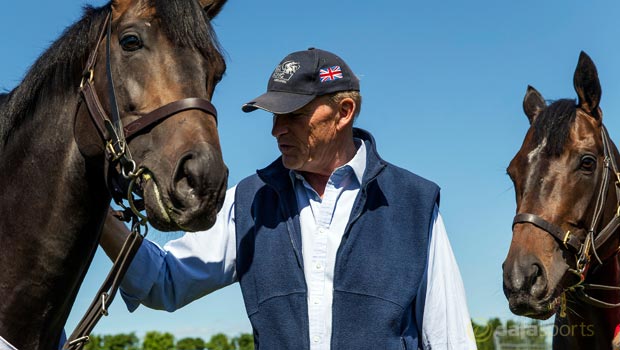 John Gosden has revealed he tried to convince owner/breeder Anthony Oppenheimer to keep Epsom Derby winner Golden Horn in training for next season.

Oppenheimer has stated his intention is to retire the Cape Cross colt to stud at the end of his three-year-old campaign, but Gosden gave it his best shot in trying to convince him otherwise.

Golden Horn bounced back from his sole defeat to date in York’s Juddmonte International last month by winning the Irish Champion Stakes at Leopardstown.

Gosden and jockey Frankie Dettori used the journey home from that victory to try to persuade Oppenheimer to change his mind.

“I had a good go at Mr Oppenheimer with Frankie in the plane on the way back from Ireland but he would not move,” Gosden revealed. “That was our one big chance and we didn’t even land a TKO never mind a knockout!”

Golden Horn is still in the mix to run this weekend in the Prix de l’Arc de Triomphe although his trainer is facing an anxious wait to see what the weather does in Paris.

Golden Horn is 7.00 to win the Arc while Treve is 1.91 to make history by winning the race for a third time. French Derby winner New Bay is 5.00.

Gosden will wait until the last minute before deciding whether to turn his stable star out at Longchamp, with alternatives at Ascot and in the Breeders’ Cup still available should he be forced to abort plans to run in the Arc.

“If the ground is good to soft or better that would be great and he’d run and I’d think Jack Hobbs would then wait for the Champion Stakes, but we are very much in the hands of the weather and we’ll see how the ground plays,” added Gosden.

“If we get the ground, great, if we don’t then we might have to reverse the plans again.”