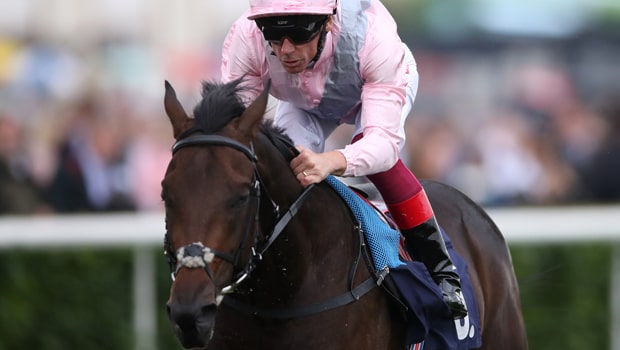 Trainer John Gosden has revealed that ante-post favourite Too Darn Hot will miss the Qipco 2000 Guineas after an injury setback.

The three-year-old was expected to be the one to beat on Saturday week when running in the first Classic of the season.

Too Darn Hot has won his first four races so far, with two wins at Sandown being followed up by successful runs at Doncaster and Newmarket.

After winning the Darley Dewhurst Stakes in October, Too Darn Hot was set for a big 2019 campaign, but a splint injury has now derailed plans.

He was ruled out of his intended prep, last Saturday’s Greenham Stakes, and Gosden has now decided to change his plans for the upcoming campaign.

The legendary trainer told the Racing Post: “Although he’s shown great improvement in the last nine days, Too Darn Hot will not be ready in time to run in the 2,000 Guineas.

“It’s unfortunate but it’s only two weeks away and that does not allow us sufficient time to get the required work into him. “Consequently he’ll miss Newmarket.

The two races we have in mind now are both next month, the Dante Stakes at York and the Irish 2,000 Guineas at the Curragh.”

Ten Sovereigns is now the 3.50 favourite for the race, while Persian King is second favourite at 5.00.

However, trainer Andre Fabre admits his team need plenty of rain to fall in the next two weeks if Persian King is to still compete.

He told At The Races: “Too Darn Hot not running doesn’t make a difference, really.

“I’ve made my decision already, the only factor which would make me change my mind is if we got a change in the weather. If it started to rain for a whole week at Newmarket I might think again but it doesn’t look like it will.”