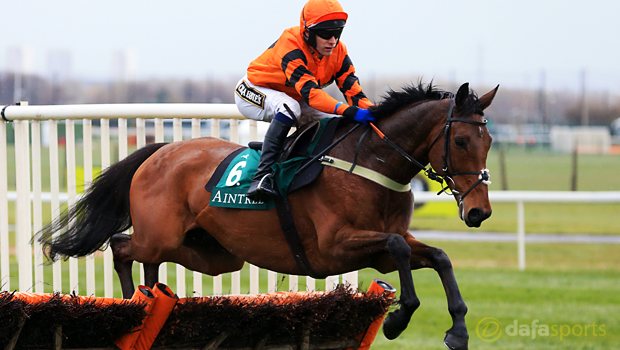 Jockey Tom Scudamore believes Thistlecrack has the class to win a Cheltenham Gold Cup if it becomes his chosen target.

Colin Tizzard’s charge has stamped his authority on the staying hurdles division this season, completing a spring festival double at Aintree on Saturday on the back of his World Hurdle romp at Cheltenham last month.

His Aintree performance was arguably even more impressive and Thistlecrack is set to head for Punchestown next where he will attempt the festival hat-trick.

The eight-year-old Kayf Tara gelding could be set to dominate the staying hurdles division for some time, having already achieved a rating that puts him on a par with the brilliant Big Buck’s.

Tizzard, however, has suggested that he may opt to send Thistlecrack over fences next season, with the Timico Gold Cup at Cheltenham the ultimate target.

The Dorset trainer appeared to have softened his stance on going chasing at Aintree having watched Thistlecrack demolish the opposition once more, with Tizzard admitting it would be hard to turn the horse away from a discipline at which he clearly excels.

Given his age, Tizzard admitted that it would be next season or never for Thistlecrack as a chaser and Scudamore believes if connections decide chasing is the way to go then their horse will be capable of mixing it with the very best.

“I see no reason why he wouldn’t jump a fence and be as good over them as he is over hurdles,” Scudamore told the Racing Post. “But that’s up to Colin and John and Heather [Snook, owners].

“If he’s as good over fences as he is over hurdles, he’s going to be Gold Cup class but the decision is theirs.”

Thistlecrack is available at 11.00 to win the Cheltenham Gold Cup in 2017, with current champion Don Cossack 6.00 and last year’s winner Coneygree at 15.00.