Posted by chris schweizer on February 7, 2018 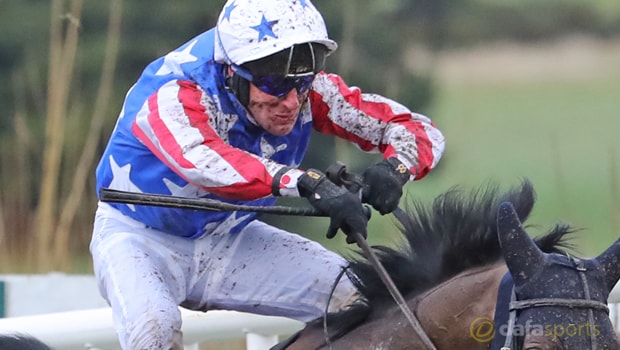 Jockey Robbie Power believes Samcro would not look out of place in the Champion Hurdle at Cheltenham next month, while he suggests he will be a ‘Festival banker’ if sticking to novice company.

The Gordon Elliott-trained six-year-old old is unbeaten under rules having won all three starts in bumpers last season, and is now unbowed in three spins over hurdles this term.

Samcro has readily alternated between two miles and two-and-a-half-miles this season over timber. On Sunday he won his first Grade One, the Deloitte Novice Hurdle at the Dublin Racing Festival, over the minimum trip.

Owners Gigginstown House Stud have suggested the Ballymore Novices’ Hurdle over 2m5f is Samcro’s most likely Cheltenham target next month.

He holds entries in all three novice hurdles at the festival but Power feels he would not look out of place in the Champion Hurdle itself.

Samcro would have to be supplemented to run, which seems unlikely give the Gigginstown policy, but Power says the race lacks depth beyond defending champion Buveur D’air.

“Samcro is living up to all of the hype,” Power said in his blog.

“There just is no inadequate trip for this horse. He can run two miles, two and a half miles or three miles, it won’t make any difference to him with his high cruising speed.

“If I were Eddie O’Leary or Michael O’Leary (owners), I’d be thinking of having a crack at the Champion Hurdle – it’s wide open this year.

“After Buveur D’Air the strength is not too deep in that race. In saying that, if he goes the novice hurdle route, he’s going to be banker of the week.”

Samcro is 1.80 to win the Ballymore Novices’ Hurdle while Buveur D’air is 1.50 to retain his Champion Hurdle crown.