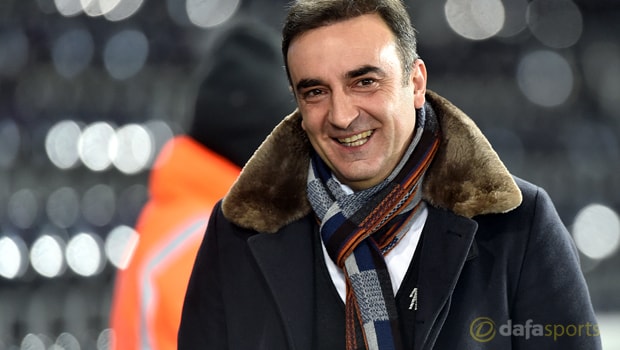 Carlos Carvalhal was delighted after seeing his Swansea City team continue their recent momentum by thrashing Notts County 8-1 in an FA Cup replay at the Liberty Stadium.

Tammy Abraham and Nathan Dyer each scored a brace in the opening half as the Premier League side took control against their League Two opponents.

Noor Husin had also netted for the visitors in the opening half but the second period became a procession as Kyle Naughton, Wayne Routledge and Tom Carroll all scored alongside a memorable debut strike for academy starlet Daniel James.

It was a club-record margin of victory at the Liberty Stadium for the Swans and sets up an intriguing fifth-round tie away against manager Carvalhal’s former side Sheffield Wednesday.

The Swans were bottom of the Premier League table and appeared destined for relegation when Carvalhal succeeded Paul Clement in December.

Victories over Liverpool and Arsenal in south Wales have helped them climb out of the relegation places and ignite the belief they can stay up.

The Portuguese was thrilled to see that forward momentum being maintained in the FA Cup.

“It is important if it is the best result in the history, but the most important thing is the attitude of the players that made all the difference. I told them before the game that we have a challenge tonight,” he said.

“I am very proud of the players as they accepted the challenge. They made Notts County look like they are not a good team, but they are a good team. The way we played made the difference. The attitude was fantastic.

“We also finished the game with three boys from the academy and we never know if we will need them during the season.”

Swansea are 2.40 to beat Burnley at the Liberty on Saturday. The Clarets, without a win since mid-December, are 3.25 while the draw is 3.10.