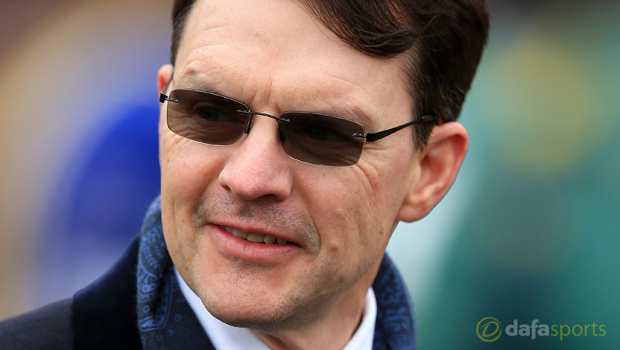 Trainer Aidan O’Brien heads for Newmarket this weekend seeking to land a Guineas double for the third time in his career.

The Ballydoyle supremo has twice walked away from Headquarters with the 1,000 and 2,000 Guineas under his arm since 2005 and he looks set to present another big challenge now.

O’Brien’s Air Force Blue is expected to take all the beating in Saturday’s 2,000 Guineas while 24 hours later Minding is likely to start favourite for the Fillies’ Classic.

Air Force Blue will begin his three-year-old campaign at Newmarket on Saturday as perhaps the most exciting horse of this Classic generation.

Beaten just once in five starts as a juvenile, Air Force Blue delivered his best effort on his final start when surging clear to take the Dewhurst Stakes at Newmarket.

That win came over 7f and, should the War Front colt handle the step up in trip to a mile, his Guineas rivals will have their work cut out to stay with him.

Ryan Moore, who landed the opening Classic of the season for O’Brien with Gleneagles last term, will be in the saddle as he was in the Dewhurst last time out.

On Sunday, it will be the turn of the fillies to take centre stage. A daughter of Galileo, Minding advertised her Classic credentials when winning the Fillies’ Mile over course and distance last October.

She has outstanding claims for the 1,000 Guineas but should have plenty to fear from the Mark Johnston-trained Cheveley Park winner, Lumiere. Air Force Blue is 1.62 to win the 2,000 Guineas.