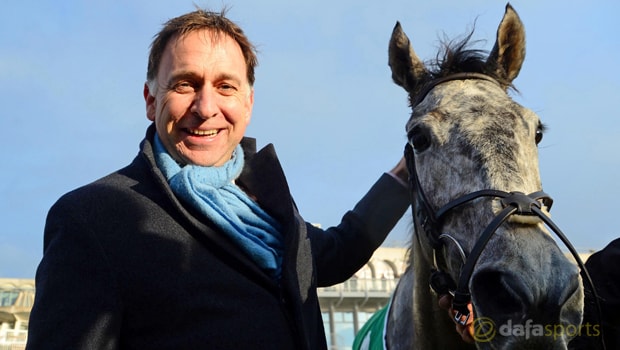 The seven-year-old was last in action on February 3 and he did well to finish second behind Footpad on soft ground.

The grey gelding has won five races to date and De Bromhead is feeling confident ahead of the Cheltenham Festival.

Petit Mouchoir is set to go up against Willie Mullins’ Footpad in the Racing Post Arkle Challenge Trophy at Prestbury Park next month.

Saint Calvados will also compete in the race and De Bromhead is excited by his team’s chances.

He told At The Races: “I think he’ll come on a lot for the run. He obviously had the setback after his first run this season, we got him to Leopardstown but I think he’ll improve plenty for it.

“Whether he’ll improve enough to beat Footpad, who was hugely impressive on the day and has been all season, I don’t know. But I think we should definitely come on for the run.

“It’s hard to put a figure on it, whether he’ll improve enough we’ll see on the day, but I suppose over hurdles he has beaten Footpad before so hopefully we are there or thereabouts, but obviously we need to (improve).

“He can do it either way, I don’t think he has to make it. With the horse (Saint Calvados) that won at Warwick on Saturday, there’s going to be a lot of pace in the race, so we’ll see how it all unfolds.”

Footpad remains the 2.00 favourite while Petit Mouchoir can be backed at odds of 5.50.