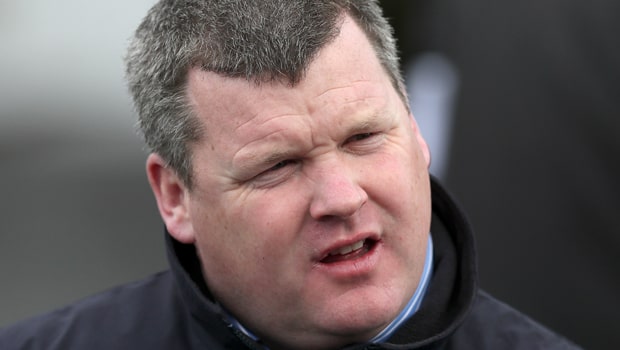 Gordon Elliott says there’ll be no hiding place for would-be hurdling star Samcro when he seeks to put his recent Down Royal defeat behind him.

The Gigginstown House-owned six-year-old swept all before him in the novice ranks last season, culminating with a decisive Cheltenham Festival success in the Ballymore Novices’ Hurdle.

He was a faller a month later at Punchestown when trying his hand in open Grade One company but connections decided to target the Champion Hurdle this season as opposed to heading down the novice chasing path.

Samcro was odds-on for a winning return in the WKD Hurdle at Down Royal this month but had to settle for second best behind Bedrock in the Grade Two contest.

He’s in line to run again on Sunday in the Morgiana Hurdle at Punchestown and his trainer won’t shirk taking on the likes of Faugheen, Melon or Supasundae in that race. Wherever he goes next, Elliott expects a proper race.

“No matter where you go there’ll be something to take on, you can’t tippy-toe around like you can in England,” said the trainer.

Unseasonably dry weather has not helped Elliott’s early-season plans and there remains some doubt on Samcro’s participation in the Morgiana, though officials at Punchestown did undertake some watering of the course on Thursday in their attempts to get the desired ground.

“We’re declaring these horses, but it’s just been an extreme year with the ground being so good,” Elliott added.

“We’re all pulling our hair out, if we take them out late we’re getting fined, which is a bit harsh, but we can’t chance these horses. He’ll definitely be declared.”

Samcro can be backed at 5.00 to win the Champion Hurdle at Cheltenham in March.