Gold Cup is Plan A for victorious Percy 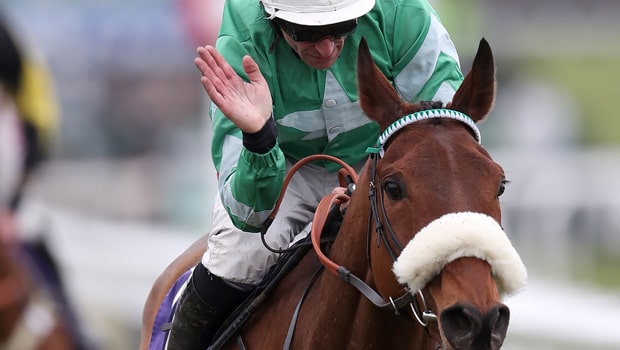 Connections of Presenting Percy were thrilled after his winning seasonal reappearance at Gowran Park on Thursday and are now turning their sights towards the Cheltenham Gold Cup.

Winner of the RSA Chase at the Cheltenham Festival last spring, the Pat Kelly-trained Presenting Percy hadn’t been seen on course since.

He travelled strongly under Davy Russell and fended off the challengers up the run-in for a relatively comfortable one-and-a-quarter-length success from Bapaume, with Killultagh Vic in third ahead of Limini.

Owner Philip Reynolds said afterwards: “We’ve been patient with him and it’s come off. We would have looked fools if it hadn’t. People seem to love the horse and with it comes a responsibility.

“I think he was fantastic today. To have a horse like this is incredible. Pat Kelly has only one day in mind for him so there is bound to be some improvement there.”

Second to Our Duke in the Red Mills Chase at Gowran last season, the same contest next month has been mooted as the next target for Presenting Percy.

“If he were to miss the Red Mills Chase for any reason or if things do not go to plan in that, then the Stayers’ Hurdle could come into the equation. However, the Gold Cup is plan A,” added Reynolds.