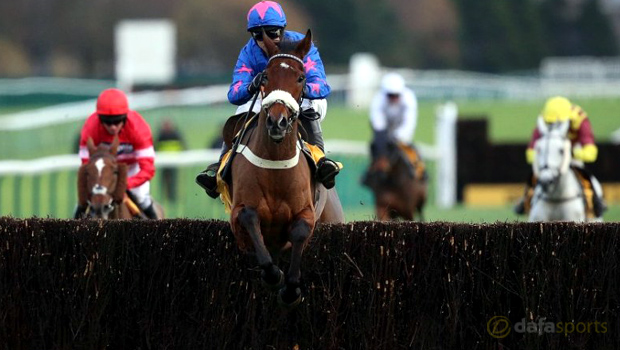 A delighted Colin Tizzard says he may not run Cue Card again before the Cheltenham Gold Cup in March after his thrilling win in the King George at Kempton.

Running in the three-mile Boxing Day showpiece for the fourth time, Cue Card proved those that doubted his stamina to be wide of the mark as he stayed on stoutly every inch of the run-in to beat long-time leader Vautour in a photo finish.

Paddy Brennan’s mount closed gallantly after the final fence, with Vautour and Ruby Walsh having looked a winning combination when favourite Don Cossack crashed out at the second last.

Vautour had travelled powerfully but in the final three-furlongs his stamina seemed to give way, allowing Cue Card to wear him down.

Tizzard says the breathing operation Cue Card underwent in the summer has given him a new lease of life, allowing him to settle off the pace in his races like never before.

That, says his trainer, means the nine-year-old has plenty in reserve for a flying finish.

“Nowadays he’s a completely different horse, he might not look as if he’s going very well but he has that left for the end. It’s fantastic,” Tizzard said.

“He’s been a great horse for five or six seasons now. Going to the last if he’d met it on a good stride he’d have won easier.”

Having had to give every ounce of his energy to get the Kempton verdict, Tizzard says he may put Cue Card away now until Cheltenham.

With the King George now added to his Betfair Chase win at Haydock in November, Cue Card will pocket connections the £1million Jockey Club Racecourses bonus if he prevails at the festival in March.

“We’ll see how he is, but he looks like a Gold Cup horse now, whether he races again (before Cheltenham) I don’t know, he’s had a hard race and was all out,” Tizzard added.

“It’s lovely he relaxes so well in a race, it’s brilliant.”

Cue Card is 7.00 to win the Cheltenham Gold Cup while Kempto.