Posted by chris schweizer on September 11, 2015 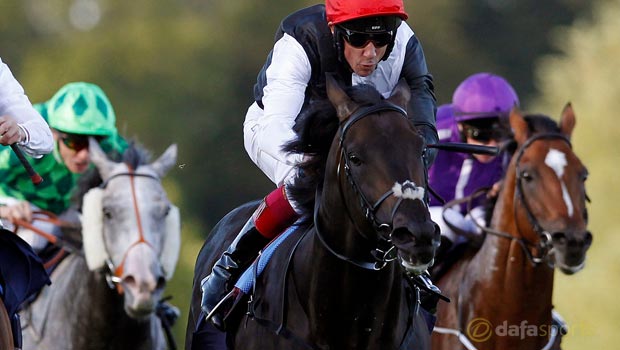 Frankie Dettori has reaffirmed his commitment to Epsom Derby winner Golden Horn by side-stepping the final British Classic of the season to partner John Gosden’s colt in the Irish Champion Stakes.

Dettori had been due to take up four rides on the final afternoon of Doncaster’s St Leger Meeting on Saturday afternoon, including Aidan O’Brien’s Bondi Beach in the feature race.

However, with officials at Leopardstown electing to move the Champion Stakes time slot forward on their card, it meant Dettori would have been cutting it fine to make the dash across to Ireland and so he has instead committed himself fully to Golden Horn.

The Epsom Derby winner is 3.00 to put his surprise defeat in the Juddmonte International at York last month behind him by winning the Irish Champion Stakes and Dettori’s agent, Ray Cochrane, says it was an easy decision to commit to the Dublin venue.

“There’s nothing any of us can do about the weather. We want to do the best for the people we’re riding for. It’s as simple as that,” said Cochrane.

“Frankie had rides in the first four races at Doncaster, the last one being in the Leger and then we were going to shoot over to Ireland and be there in good time. Now they’ve changed it by bringing it forward there’s no point thinking of trying to do both.”

Leopardstown made their decision in the hope of providing the best possible racing ground for runners in the Champion Stakes.

Both Golden Horn and dual 2000 Guineas winner Gleneagles are holding out for good racing ground and, with conditions at the Foxrock venue currently good to firm, firm in places they look set to get their wish.

Ballydoyle runner Gleneagles is 5.00 for the Irish Champion Stakes while last year’s winner The Grey Gatsby is 10.00 for trainer Kevin Ryan.