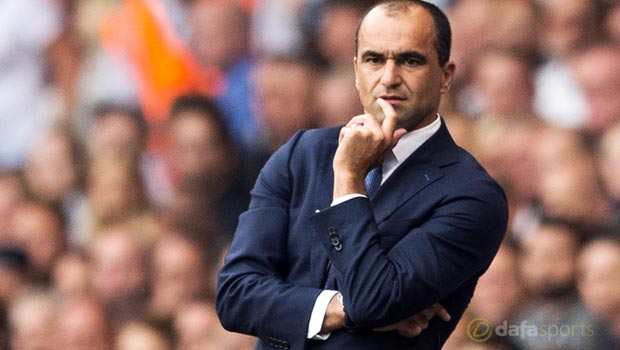 Roberto Martinez has called on Everton supporters to provide the sort of atmosphere on which his team will thrive for Saturday’s clash with Premier League champions Chelsea.

The Goodison Park clash kicks off at lunchtime but the Toffees boss says that should not stop the Everton faithful generating a positive atmosphere.

He feels his players rise to the occasion when buoyed on by a vociferous support and despite the early start he wants Goodison Park rocking.

“It’s an early kick-off which always brings a very different atmosphere, but we’ve had very good moments with early kick-offs and last season against Manchester United was a real example of that,” he told reporters.

“We’ll have to be at our very best but I do feel that when Goodison is at its best we can perform at a very good level and that’s what we are looking forward to doing.”

Everton have picked up just one point from six on Merseyside so far this season, drawing 2-2 with Watford on the opening afternoon before losing to pacesetters Manchester City.

On the road, they enjoyed a resounding 3-0 win over Southampton at St Mary’s before returning from White Hart Lane with a point.

Martinez says they have had a tough start this season but he feels they can take something from the clash with Jose Mourinho’s side.

“The opposition that we’ve been facing have been really strong but I think the performances have been giving us a real sense of confidence that if we get our crowd behind us we can perform against anyone,” he added.

Everton have won four of their last six Premier League games against Chelsea on Merseyside and are 4.00 to do so again on Saturday.