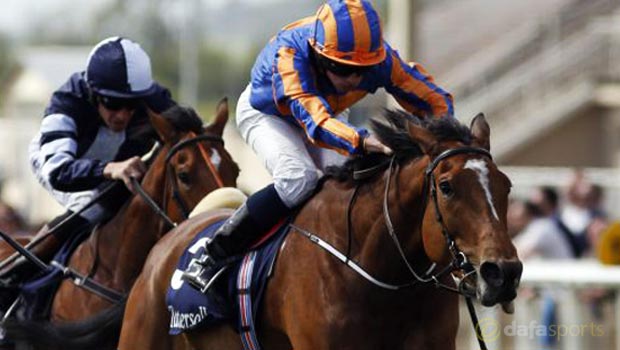 Coolmore representative Kevin Buckley says there is still a chance Found could run in the Investec Derby at Epsom a week on Saturday, despite her loss at the weekend.

Found suffered a narrow defeat to Pleascach in Sunday’s Irish 1,000 Guineas but she will still be heading to Epsom, and the Derby has not been ruled out just yet.

“The plan is to come to Epsom, probably for the Oaks but possibly for the Derby,” Buckley said.

“‘We have a good representation in the Oaks with Diamondsandrubies and Together Forever, so we have to look at the Derby for Found.”

The last filly to run in the Derby was Cape Verdi, who finished ninth in 1998, while only six fillies have won the mile-and-a-half Classic.

Even so, with a number of Aidan O’Brien Derby prospects slipping by the wayside, Found could still get the nod.

Other possible Derby contenders for O’Brien include Chester Vase winner Hans Holbein, but the timing does not look to be right for dual Guineas winner Gleneagles.

“I was taken by Hans Holbein’s performance at Chester. He’s a big price,” Buckley added.

“Aidan maintains he (Gleneagles) is a specialist miler. Being realistic, the St James’s Palace (at Royal Ascot) is his likely target.

“Giovanni Canaletto is still being trained with the Derby in mind, but the race may come too soon.”

Golden Horn is 3.00 in the winner and each way market ahead of the Investec Derby and Giovanni Canaletto is 15.00.