Dewhurst next for Too Darn Hot

Posted by chris schweizer on October 2, 2018 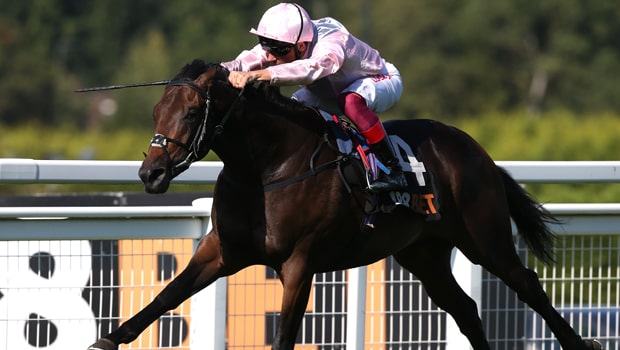 John Gosden is set to allow Too Darn Hot to stride out in Group One company for the first time in the Darley Dewhurst Stakes at Newmarket on October 13.

The son of Dubawi is unbeaten in three starts so far, impressively sweeping from last to first to win the Group Two Champagne Stakes at Doncaster last month on St Leger Day.

He had earlier scooped an effortless debut success over a mile at Sandown in August and returned to the Esher track to take the 7f Group Three Solario Stakes in early September.

The Dewhurst has been touted and Gosden feels he’s ready to go and perform in the traditional end-of-term examination for the juvenile crop, an excellent trial for next season’s opening Classic.

“He’s in great form, very happy with him. He’s a sweet, lovely horse to be around,” the Newmarket trainer told At The Races.

“He’ll pick up and do a little piece of work next week, a couple of bits, and then hopefully on to the Dewhurst.

“We couldn’t be happier with him. He’s got a high cruising speed and a great turn of foot.”

Gosden admits that he isn’t normally one known for throwing his juveniles in so deep early in their careers, but feels Too Darn Hot fully merits his rapid ascent.

“It’s not like me to take a horse from a maiden to a Group Three to a Group Two. I don’t normally do that kind of thing with two-year-olds. I go quietly along but he’s a well-bred horse,” he added.

“He’s put himself forward, he’s up for the game. He’s exciting. It’s a leap in class every time and we couldn’t be happier with him – he’s a very together horse.”

Too Darn Hot is the 5.00 ante-post favourite to win the 2000 Guineas at Newmarket.