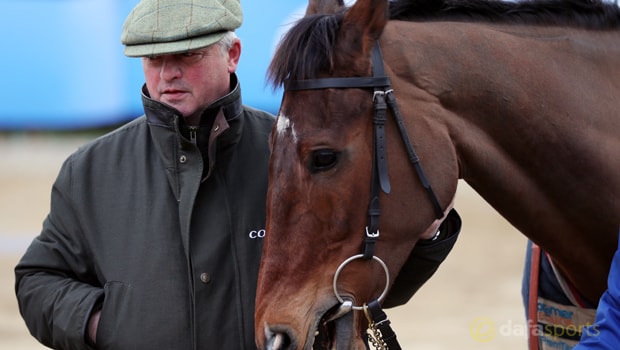 Colin Tizzard’s legendary chaser Cue Card has been cleared for take-off in the Ryanair Chase at Cheltenham next month, with the Gold Cup now firmly off his radar.

Cue Card has been one of the most popular chasers in Britain for some years but his attempts to win the Gold Cup have ended in despair, with the now 12-year-old falling at the third last fence in the previous two seasons when still firmly in contention.

A former Champion Bumper winner, Cue Card also tasted Festival success in the Ryanair back in 2013.

Having run a stormer this month when second to the progressive Waiting Patiently in the Ascot Chase over 2m5f, Tizzard and owner Jean Bishop have now settled on that trip in the Ryanair at Cheltenham in two weeks’ time.

Cue Card is set to be retired at the end of this season, with Cheltenham potentially being his final outing.

“He was in very good form last week over 2m5f and he’s won the Ryanair in the past.

The Gold Cup is a hard race and his best chance of winning is the Ryanair, so that’s why we’ve gone there,” Tizzard confirmed.

“Jean and I had ten minutes of very good conversation [on Saturday] and it wasn’t a hard decision in the end, we just didn’t want to make it and change our minds.

“The horse is fine and we went a little bit faster with him this morning and he looked superb.

He looks a bit fitter than he did last week and if we can take that form to Cheltenham we’ve got a shout. Paddy Brennan rides.”

Cue Card is 9.00 to win the Ryanair Chase at Cheltenham, while Waiting Patiently is currently 4.50. Last year’s winner Un De Sceaux is favourite at 3.50.