Posted by Vincent Henderson on February 25, 2018 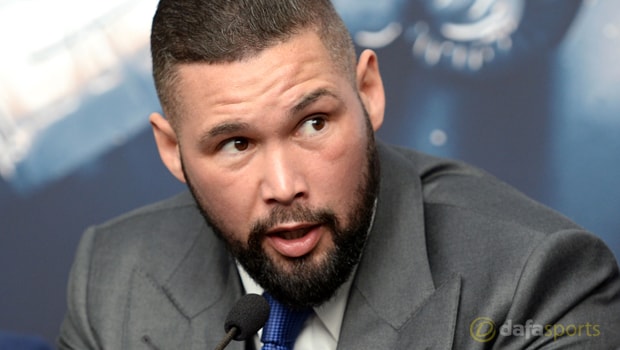 Tony Bellew says he likes Tyson Fury but would still welcome the chance to step into the ring with him at Old Trafford.

The British pair have exchanged verbals over social media in the past but they shared an embrace at last week’s George Groves-Chris Eubank Jr fight in Manchester.

Liverpudlian Bellew says he wouldn’t hesitate about heading to Manchester to face Fury at the home of Manchester United. “I did see him yeah,” Bellew told Sky Sports.

“He got me in a bit of a choke hold and he hugged me.

“I know he’s saying he doesn’t like me and that he wants to beat me up, but listen we get on fine. Tyson Fury is a good fellow. I’ve got a lot of time for Tyson Fury.

“Me and Fury? Old Trafford sounds nice, doesn’t it, Old Trafford on a summer’s night.” First up, Bellew will resume his rivalry with David Haye in a rematch on May 5.

A repeat victory could lead to another all-British battle with Fury, but American Andre Ward is also a future option for Bellew.

If the former pound-for-pound king comes out of retirement, Bellew and promoter Eddie Hearn have both suggested a fight would be possible, though the former suggests Ward will have to come to Britain if he wants it.

“Right at this moment in time, it’s a more realistic option, that’s what I will say,” said Bellew.

“I’m not really bothered about fighting in America. It doesn’t really do much for me, if I’m being totally honest. I really like The O2 [in London].”

Bellew is 3.00 to win his rematch with Haye, who is favourite to avenge his previous defeat at 1.40.