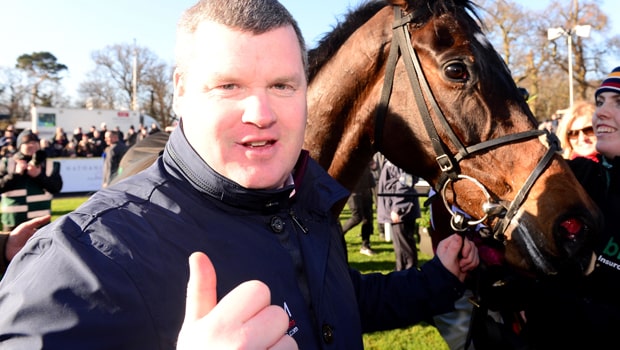 Gordon Elliott is plotting an attack on Saturday’s Ryanair Stayers’ Hurdle at Aintree with Apple’s Jade.

The star mare won her first four starts of this season over a variety of trips in Ireland, including the Irish Champion Hurdle (2m) and the Christmas Hurdle (3m), both at Leopardstown.

She was sent off favourite for last month’s Champion Hurdle at Cheltenham but never appeared to be relishing the challenge and could finish only sixth as Espoir D’Allen won for trainer Gavin Cromwell.

Buveur D’Air was a faller in that race, seeing his quest for three-in-a-row ended, and a rematch with Nicky Henderson’s star this week at Aintree is among Apple’s Jade’s options in the two-and-a-half-mile Aintree Hurdle.

While Apple’s Jade is primed for Aintree, Elliott won’t be taking Samcro to Merseyside.

“Apple’s Jade and Samcro worked at the gallops facility at Skryne [County Meath on Monday morning].

Apple’s Jade has a couple of Grade One entries at Aintree and will probably go, but Samcro won’t be travelling,” said Elliott.

“Apple’s Jade is in the Aintree Hurdle on Thursday and the Stayers’ Hurdle on Saturday. I’ll talk things over with Michael and Eddie [O’Leary] before we decide, but we might go for the longer race with her.”

Apple’s Jade could cross swords with Sam Spinner, second to Paisley Park in the Cheltenham Stayers’ race last month, as well as Supasundae at Aintree this weekend.

Samcro could now have an Easter target in Ireland, having not raced since a disappointing run at Leopardstown over Christmas.

Elliott said: “He might go to Fairyhouse on Easter Monday for a Grade Two hurdle race over two-and-a-half miles.”