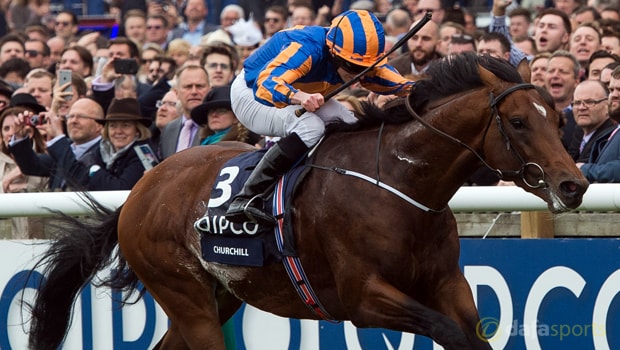 The Galileo colt was produced by Ryan Moore with a decisive, race-winning move at the furlong pole as he landed the opening British Classic of the season at Newmarket on Saturday.

It was a classy performance from last year’s champion two-year-old colt, taking the scalp of a pair of this season’s early improvers in Barney Roy and Al Wukair in second and third respectively.

His trainer was thrilled with the Newmarket performance and he has no doubts that his charge will improve for the run.

“I was very worried about it being his first run. He’s a big horse and we knew he would come on for the run. Ryan gave him a lovely ride,” O’Brien told ITV Racing.

“Everyone at home was very happy with the horse which is why we took the chance to come first time, so I’m delighted.

“We always thought he was a horse with a lot of speed. Thoughts immediately were cast towards Epsom next month, O’Brien feels that Churchill has the ability to settle in a race and he suggests stamina should not prove a barrier for a potential Derby tilt.

He insists that a decision on Epsom will be taken in due course by the colt’s Coolmore owners.

“The lads (owners) will decide about the Derby themselves. They make all the decisions about all the horses,” he added.

“He is very relaxed and will probably get as far as you want him to get – he has speed as well, but he has a very relaxed way of racing.

He is by Galileo and horses by that sire very rarely lack stamina.” Churchill is 6.00 to win the Derby at Epsom.