Advertise Gets Flight Booked for Phoenix 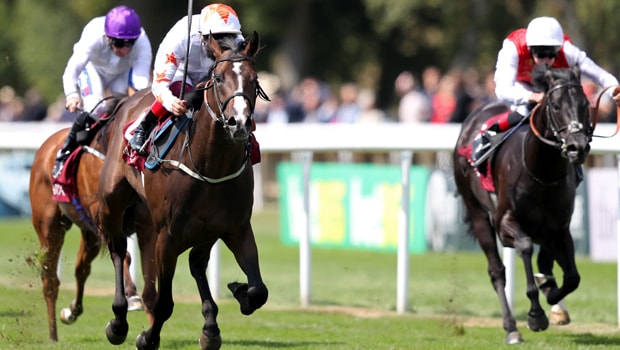 Advertise will run in Sunday’s Keeneland Phoenix Stakes at the Curragh after trainer Martyn Meade secured him a raceday flight to Ireland.

The Newmarket handler has the Curragh Group One along with the Prix Morny at Deauville a week later as his twin targets.

The stiff six furlongs on offer at the Curragh mean that is the preferred option for the impressive July Stakes winner.

Earlier this week Meade suggested he would be supremely confident of winning the Curragh race, though he was unable to arrange travel to Ireland on Sunday morning.

That has been rectified now and Frankie Dettori is booked to ride the thrice-raced colt, who finished second in the Coventry Stakes at Royal Ascot in June behind Calyx before scoring in the Group Two July Stakes at Newmarket last month.

“The Phoenix is the plan again. Anything can happen, but we are working on that basis and Frankie [Dettori] can ride,” said the trainer.

“We’ve organised a flight for him from Farnborough to Dublin on Sunday morning, so he will arrive at the Curragh fresh and well for his race in the afternoon and then come home later the same day. What we didn’t want was a sea crossing, as you can never be sure how that will go.”

Aidan O’Brien has won a staggering 16 renewals of the Phoenix Stakes in his career, including the previous four.

Sergei Prokofiev, a neck behind Advertise at Ascot in June, is scheduled to lead his assault on Sunday.

While Meade had been exuding confidence earlier in the week, he does now appear to be reigning in somewhat.

He added: “Advertise’s form speaks for itself and he has only progressed since Newmarket. I think we go to the Curragh with a really good chance.

“Any Group One is a big ask, and the Phoenix Stakes has been Mr O’Brien’s territory for many years, which is something I don’t underestimate. That’s why it’s so important to get Advertise there in the best possible shape.”