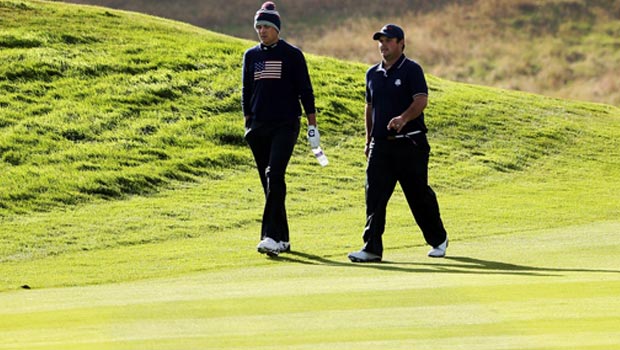 USA captain Tom Watson acknowledged that he made an error by leaving in-form rookies Patrick Reed and Jordan Spieth out of the Friday afternoon session as Europe took a 5-3 lead on day one of the Ryder Cup.

The duo paired up to thrash Europe’s ‘Mr Ryder Cup’ Ian Poulter and his rookie partner Steven Gallacher 5&4 in the morning fourballs at Gleneagles as USA took a 2.5 -1.5 lead into the afternoon foursomes.

However with Watson opting to stick with the tried and trusted partnership of Phil Mickelson and Keegan Bradley that had defeated the European pair of world number one Rory McIlroy and Sergio Garcia in the fourballs, it back-fired as they were beaten by Victor Dubuisson and Graeme McDowell.

A frustrated Watson said: “We were outplayed, I know that. It started off looking pretty good and then we didn’t perform in the afternoon and it’s very disappointing.

“The players themselves are disappointed. I know the question is going to be asked about Jordan Spieth and Patrick Reed, whether I should have played them in the afternoon.

“I thought at the time it was the best decision not to play them. It was a decision my vice-captains and I felt very strongly for. I had some doubt in making that decision but my gut feeling said that was the right decision to make.

“When I told Patrick he wasn’t going to play in the afternoon I said ‘How does that make you feel?’ and he said, “Well, I’m all right with it…. Well, really, captain, I’m not all right with it’.

European captain Paul McGinley was delighted with his side’s foursomes display in the afternoon as they picked up 3.5 points to take a two-point lead into Saturday’s second day.

“The way the Americans played the last few holes was very strong and they certainly had their tails up going into the afternoon sessions.

“That can often have a ripple effect and a domino effect so for our guys to react the way they did, for all four matches to be up after six holes, was a terrific response.”