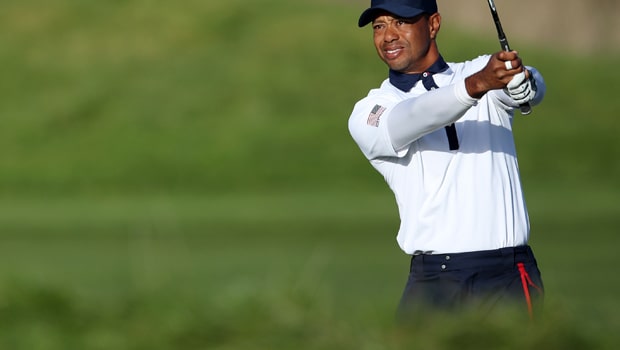 American Tiger Woods has confirmed he has had to withdraw from this week’s Arnold Palmer Invitational after suffering a neck strain.

The 43-year-old had been hoping to tee off at Bay Hill this week as he tries to find his rhythm ahead of The Masters. Woods is now 13.00 to win at Augusta National but he is running out of time to prepare for the event which starts in April.

He has only completed three tournaments so far in 2019, the Farmers Insurance Open, Genesis Open and WGC-Mexico Championship.

His best result came in Mexico where he shared 10th position but the world number 12 is now focused on recovering in time for the Players Championship.

In a post on Twitter, he said: “Unfortunately due to a neck strain that I’ve had for a few weeks, I’m forced to withdraw from the API.

“I’ve been receiving treatment, but it hasn’t improved enough to play. My lower back is fine, and I have no long-term concerns, and I hope to be ready for The Players.

“I’d like to send my regrets to the Palmer family and the Orlando fans. Its connection to Arnold makes it one of my favorite tournaments and I’m disappointed to miss it.”

Woods returned to form last year following long-term back problems and recorded his first win in five years on the PGA Tour at the Tour Championship in September.

The 14-time major winner has won the Arnold Palmer Invitational an incredible eight times, but this week’s title will go to another of the world’s best.

Northern Ireland’s Rory McIlroy is the 7.50 favourite to win, while Justin Rose is second favourite at odds of 11.00.

America’s best chance of a home victory could come from Brooks Koepka or Rickie Fowler who are both priced at 12.00.