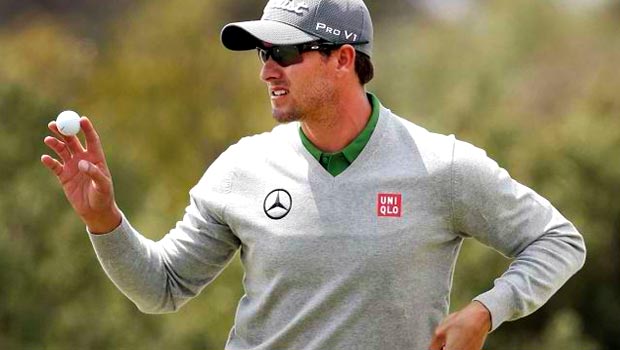 Adam Scott is poised to follow up last week’s Australian PGA Championship win with a victory at the Australian Masters as he will take a four-shot lead into Sunday’s final round at Royal Melbourne.

The in-form Aussie was level with Nathan Holman at the top of the leaderboard at the halfway stage, but he quickly moved ahead in the outward nine.

Scott followed up a birdie three at the first with a two at the par-three fifth before hitting three consecutive birdies from the seventh to reach the turn at five-under.

Scott recovered from consecutive bogeys at 11 and 12 with a birdie at the par-five 15th and he picked up another shot at 17 to record a second successive 66 and he sits on 14-under-
par.

Scott’s fellow compatriots Holman, Matthew Griffin and Nick Cullen are tied on 10-under after respective third rounds of 70, 69 and 69, while veteran Fijian Vijay Singh joins them following his round-of-the-day 63.

And the 50-year-old is looking to wreck Scott’s hopes of back-to-back tournament victories going into Sunday’s play.

“I played really well,” said Singh. “I mean, the first nine holes were incredible, I thought I could have birdied every hole.

“I made a very long putt, or a pretty good putt, on 10, which kind of gave me momentum again and then I played pretty solid from there in.

“I didn’t play any different than I did the first two days, I just managed my game much better.”