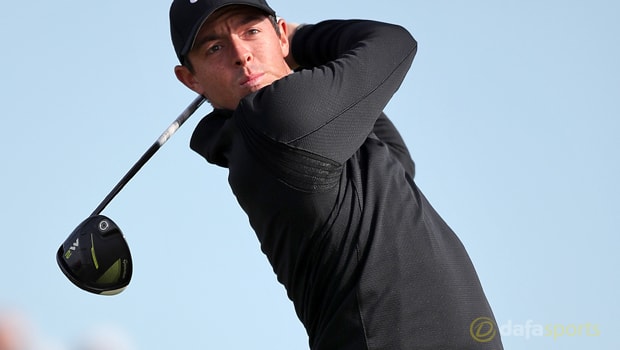 Rory McIlroy was delighted after getting his bid for glory at the Masters in Augusta off to a solid start with a three-under par opening round.

The four-time Major champion is once more attempting to complete his career grand slam of golf’s marquee events by donning the Green Jacket in the Butler Cabin on Sunday evening.

McIlroy made his best start to a Masters since 2011, firing four birdies and dropping only one shot in a round of 69.

That was enough to give him a share of fourth place, three shots adrift of first-round leader Jordan Spieth on six-under par.

The American, winner of the Masters in 2015, continued his love-affair with Augusta National as he birdied five holes on the trot from the 13th to get to seven-under par, though a wild drive on the final hole cost him a bogey.

Spieth leads by two from fellow Americans Tony Finau and Matt Kuchar. McIlroy is alongside the likes of Henrik Stenson, Patrick Reed, Haotong Li and Charlie Hoffman on three-under and he is content to be there.

The Northern Irishman made crucial par saves on each of the final three holes to protect his score and McIlroy knows the value of being high on the leaderboard early in the tournament.

“Jordan had a pretty strong finish there but this is my best start in a few years,” McIlroy said.

“It’s such a hard golf course to play catch-up on. If you start to chase it around here, that’s when you start to make mistakes.

“But to be right up there and have the ability to stay patient, because of the position I’m in, that’s a nice luxury I have over the next few days.

“I drove it well. Everything was really solid. And if I can continue to play like that over the next three days, I’ll be pretty close.”