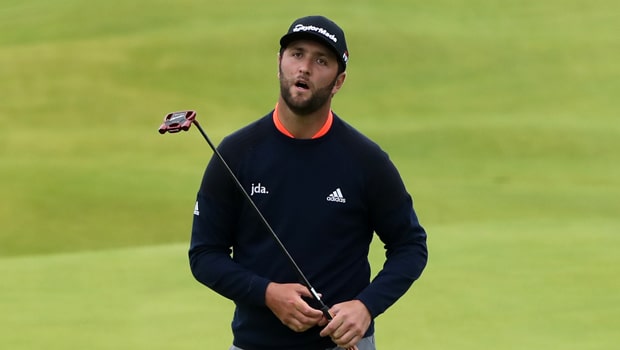 Jon Rahm admitted he had never even seen the front nine at TPC Southwind prior to shooting an opening round of 62 at the WGC FedEx St. Jude Invitational.

The Spaniard said he was jet-lagged following his arrival from last weekend’s Open Championship in Northern Ireland and so managed only nine holes of practice in Tennessee.

Despite the unfamiliarity, Rahm went five-under through that front nine and eight-under in total – his 62 the lowest in WGC history – to take a three-stroke lead over Patrick Cantlay, Bubba Watson, Cameron Smith, Hideki Matsuyama and Shugo Imahira.

“I didn’t do anything Monday or Tuesday, I just rested and stretched at the hotel in the room,” Rahm said. “And then yesterday I came with the plan of playing 18 holes. I putted and warmed up and after four holes… I was dead. I couldn’t swing properly.

I was really tired, so I just decided to just finish the round of nine holes, eat and just putt a little bit and go. “I tried to put a little emphasis on being rested and it paid off today. Obviously I have three more days to go and hopefully the battery lasts, but that was the main deal for me.”

The marquee grouping of day one struggled as world number one Brooks Koepka signed for two-under par, having been one-over through 11 holes. Rory McIlroy birdied four of the last five holes to reach one-under par after struggling mid-round, while Jason Day made only one birdie and sits on two-over.

England’s Tyrrell Hatton and Ian Poulter are both on four-under after round one, joined by Alex Noren and Thorbjorn Olesen, among others, while Justin Rose is on three-under and Open runner-up Tommy Fleetwood is one further back. Jordan Spieth had the eventual round of the day. The three-time major winner made seven birdies although he racked up triple-bogeys on the back nine and is level par.