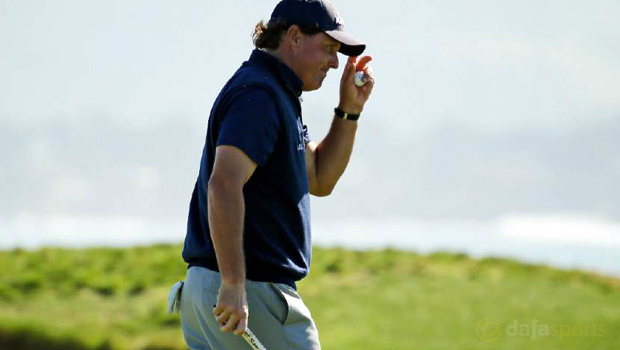 Phil Mickelson feels his near-miss at the Pebble Beach Pro-Am proves his game is coming together nicely for the big tournaments.

‘Lefty’ had a chance to clinch his first win since the 2013 Open Championship in California on Sunday, starting the final round two shots clear of the field.

However, his worst round of the week, a level-par 72, proved costly as Vaughan Taylor swooped to capture the title by one shot on 17-under.

Mickelson had the chance to force a play-off with Taylor with a five-foot birdie putt at the last, but rolled his ball past the edge of the cup before doubling over in despair.

The five-time major champion admitted he had been shocked to miss his putt although he is still determined to take the positives from another good week.

The American has rediscovered his best form in the early stages of the year, finishing tied for third at the CareerBuilder Challenge and in a share of 11th place at the Phoenix Open.

Mickelson feels his runner-up finish at Pebble Beach is just another step in the right direction as he gears up for the first major of the year, the Masters, in April.

“The positive is that I’m having more fun playing golf right now that I’ve had in years,” he told the PGA Tour website. “I’ve got control of the golf ball. I’m hitting a variety of shots and pulling them off with ease, and I’m just having a lot of fun.

“As nervous as I was and as disappointed as I am that I didn’t win, this was so much fun for me to get back in the thick of it and feel the pressure… but it just tells me I’ve got a little bit more work to do.”

Mickelson is 21.00 to claim a fourth Green Jacket at Augusta later in the year, with defending champion Jordan Spieth 6.50 and Rory McIlroy 7.50.