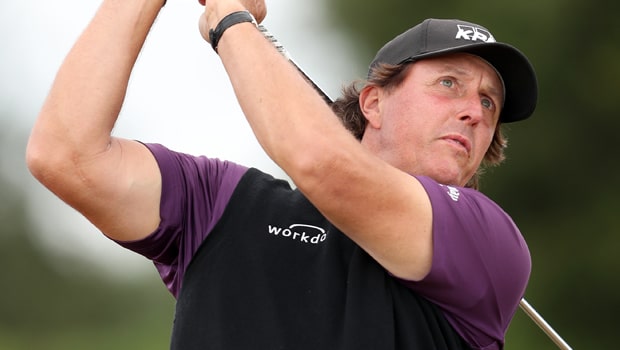 Phil Mickelson carded six straight birdies and shot a seven-under round of 65 to sit within two strokes of leader Sepp Straka in the PGA Tour’s season-opening Safeway Open, before suggesting he isn’t playing “anywhere near” his best golf.

Mickelson arrived at the North Course at Silverado Resort and Spa in California off a bitterly disappointing Ryder Cup in Paris, where he failed to earn a point as the United States lost 17.5 to 10.5 to a dominant European team.

There were no early signs of fireworks as Mickelson picked up one early birdie in round one, but he went on a run from the turn, making six consecutive birdies form the ninth hole onwards.

The left-hander suggested afterwards that nobody should be ‘fooled’ by the early gun-show to start his new wraparound season.

“I’ve been putting well, like I can putt,” Mickelson said. “But I was surprised at some of the shots I’ve hit.

“Honestly, I hit it just terrible [recently] and today was kind of an anomaly. Don’t let the good round fool you. I’m not at all at my best. A few things clicked and it was fun.”

After earning a Ryder Cup wildcard pick from captain Jim Furyk, the five-time Major champion endured a tough end to the FedEx Cup Playoffs and then lost both games in France.

He is taking some positives, despite his overall lack of form, with his putter certainly pleasing him.

“I had two terrible weeks at BMW and the Tour Championship,” Mickelson said.

“But I’ve become a great putter week in and week out with a few bad weeks as opposed to in the past I’ve been kind of an average putter with a few spikes.

“I’m back to putting well again and rolling it in the way I did all last year.”

Straka leads on nine-under par, one shot clear of Chase Wright following round one.

Mickelson occupies third spot on his own with Brandt Snedeker among a ground of eight players on six-under par and Scotland’s Martin Laird one stroke further back on five-under.

Mickelson is favourite at 8.00 to win the Safeway Open, with Snedeker next in at 11.00 and early leader Straka priced at 17.00.