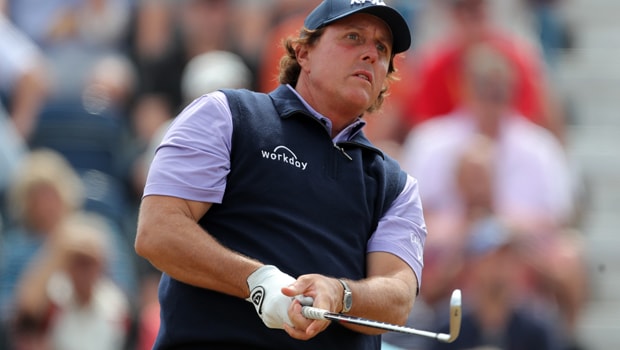 Phil Mickelson has stated he intends on playing well enough over the next fortnight to leave USA Ryder Cup captain Jim Furyk with an “easy decision” to pick him.

The veteran left-hander has failed to qualify for the United States team automatically for next month’s matches with Europe at Le Golf Nacional in Paris.

He is now reliant on a captain’s pick from Furyk and joins fellow veteran Tiger Woods in the queue for Furyk’s approval.

Mickelson carded a first-round, three-under-par 68 in The Northern Trust at Ridgewood Country Club in New Jersey, two shots off the leaders.

The opening FedEx Cup Playoff event is followed next week by the Dell Technologies Championship in Boston at a golf course Mickelson has often played well on before.

Thereafter, Furyk will put the finishing touches to the 12-man United States team to defend the trophy against Thomas Bjorn’s Europe in France, and ‘Lefty’ wants to be on the plane.

“I really like this golf course and I’m playing well,” he said.

“Next week we’re at TPC Boston, which I love. So I’m going to play really well these next two weeks and I’m going to make it an easy decision [for Furyk to pick him].”

Mickelson is now 41.00 to win The Northern Trust Open, while the USA are 1.85 to win the Ryder Cup. The 48-year-old believes he is very close to hitting top gear.

“I just drove it terrific,” Mickelson said of his first round in New Jersey.

“I thought it was going to be a great day and had a great warm-up. Got on the course and just did the usual, wasn’t quite there.

“I think it’s more of a mental thing right now than it is the actual swing because I’ve been driving it great.

“This could easily have been a round that got away from me. I ended up make some putts to keep the round at a good score. It’s not far off and I’m going to come out tomorrow and shoot a really good round.”