Patience a virtue for US Open champ Brooks Koepka 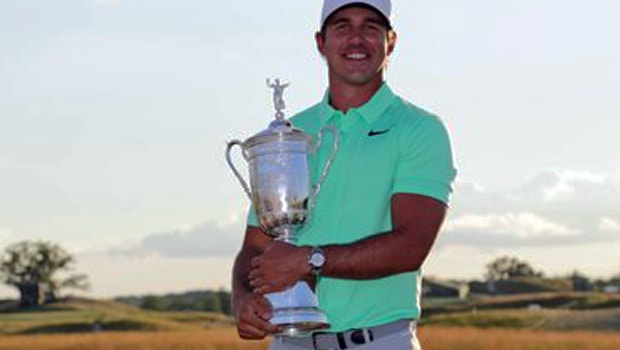 Brooks Koepka carded a closing 67 at a windswept Erin Hills to finish on 16-under par and win the US Open.

The American attributed his maiden major championship success to a patient approach throughout the four rounds and revealed he’d been told by world number one Dustin Johnson to adopt just that stance.

Johnson, last year’s US Open champion, missed the cut at Erin Hills on Friday but he took time out to call his good friend and fellow power-hitter Koepka with some advice that stood to the latter.

Koepka began the final round a shot off the lead but fired six birdies and a solitary bogey to finish four strokes ahead of overnight leader Brian Harman and Japan’s Hideki Matsuyama, with England’s Tommy Fleetwood a shot further back in fourth spot.

Despite the powder-keg pressure of Sunday afternoon at a US Open, 27-year-old Koepka rarely looked to be under any massive pressure during his final round.

“Just keep doing what you’re doing, you’re going to win the thing, and just don’t get ahead of yourself.

A bunch of people told me that. “And I felt like I really stayed patient all week.

I felt like that has been the thing lately with me, why I haven’t really played that well – I’ve been trying to win so badly.

I felt like I’ve underachieved.” Koepka’s winning tally of 16-under matched the tournament scoring record set by Rory McIlroy at Congressional in 2011.

Fleetwood meanwhile climbed to a career-high 21st in the world rankings with his fourth-placed finish and the 26-year-old feels he’ll take a great advantage from having played in the final groupings on the weekend at a major.

“I’ve never contended for a major before, so when you get to Saturday and Sunday you’ve got to see how you react and how you feel,” said Fleetwood.

“I enjoyed playing late on Saturday and Sunday and then next time, whenever that comes, I know that inside myself I feel fine and I can contend for the victory.”

Koepka is 29.00 to add the Open Championship next month, with Fleetwood 41.00 for Royal Birkdale and Johnson the 9.00 favourite for Claret Jug success.