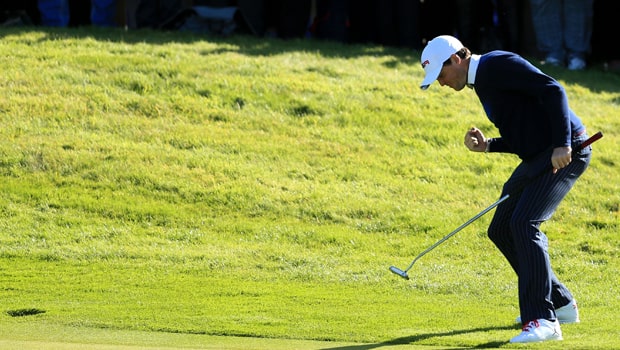 Keegan Bradley leads the RBS Canadian Open after round one on seven-under par, while the big-name trio of Dustin Johnson, Brooks Koepka and Justin Thomas are toiling.

Bradley’s opening 63 included five straight birdies around the turn and was enough to give him a one-shot lead over a group of five players on six-under par that includes Shane Lowry, Rafael Castro and Sungjae Im.

Johnson, Koepka and Thomas former a stellar cast of American Major winners that headed the market starting out the event but they failed to find the sparks on day one.

The trio made 11 bogeys between them in round one at Hamilton Country Club in Ontario and Koepka admitted things simply didn’t click for him on the putting greens.

“I gave myself some good chances and didn’t capitalise. Two birdies today, very easily could have been five or six, so disappointed with that but also at the same time pretty pleased.”

Rory McIlroy (-3) started by mixing five birdies with a dropped shot on each nine and the Northern Irishman felt his tally was just about as poor as it could have been, given how he struck the ball.

“I really feel like it’s the worst I could have shot,” he said.

“A big improvement from how I played last week at Memorial. The work I did over the weekend, I definitely hit it much better today off the tee and that was a big key.”

McIlroy is now tournament favourite at 9.50 with first-round leader Bradley 11.00 and Koepka 26.00 following his slow start.