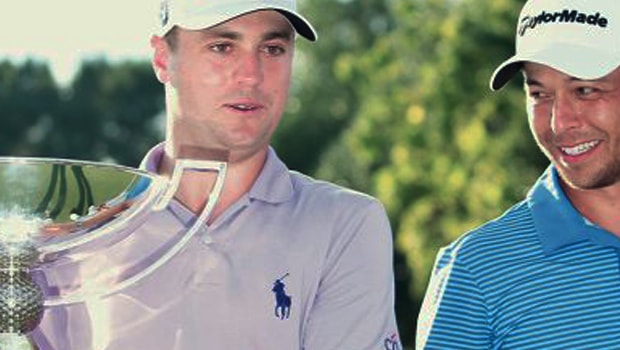 American Justin Thomas admitted it was a mixed feeling as he failed to win the Tour Championship but still won the FedExCup and the $10million jackpot.

Another fine performance this weekend allowed Thomas to jump above Jordan Spieth in the FedEx rankings but it was not enough to win last weekend’s event.

The 24-year-old finished second on 11-under par, just one shot behind eventual winner Xander Schauffele.

Schauffele kept his composure to shoot a final round of 68, while overnight leader Paul Casey slumped to fifth after a round of 73.

Thomas moved into a tie for the lead at the 16th and looked in a good position to win his sixth tournament of the season but he admits the consolation prize does make up for it.

He told Sky Sports: “I’m bummed to not be in a play-off and have a chance to win, but that was a gutsy birdie Xander made on 18.

I was trying to win a golf tournament, but winning the FedExCup is a great bonus.

“It’s a feeling I’ve never experienced before. It’s just weird because it didn’t come with winning the golf tournament so it’s hard to fully appreciate it.

“It’s a tremendous honour and I’m really excited to have my name on the trophy.”

Spieth had been hoping to top the rankings for a second time but he was quick to congratulate his fellow countrymen.

He added: “It was a great season, if I could repeat it every year for the rest of my career I certainly would.

“I think it’s rightfully so that he (Thomas) wins the season-long race this year.

Five wins with a major championship and you’d like the FedEx Cup to go to the most deserving player for the entire year and I think that’s him.”