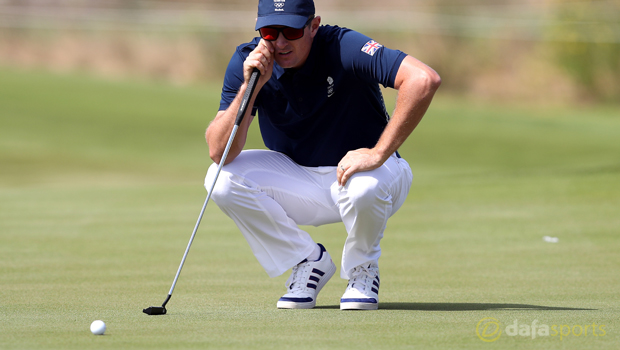 Justin Rose says he is ready to refocus on PGA Tour matters following his Olympic triumph and is eyeing glory at The Barclays this week.

The Brit secured a two-stroke victory ahead of Sweden’s Henrik Stenson as golf returned to the Games in Rio de Janeiro but, after the highs of claiming gold, he must now concentrate on the FedEx Cup play-offs.

Rose currently sits 51st on the standings and has work to do if he is to move up and into the top 30 required to qualify for the Tour Championship.

An especially good run could see him break into the top five and have a shot at the $10million bonus at East Lake.

However, he has traditionally struggled on the feared Bethpage Black layout, the course The Barclays returns to this week for the first time since 2012.

The 36-year-old finished 46th when the event was last staged there while he missed the cut when the venue hosted the 2009 US Open.

Rose admits he is hoping for a case of “third time lucky” in Long Island as he looks to books his place at the Tour Championship.

“Everyone’s got their mind on East Lake,” Rose said in a pre-tournament press conference. “Everyone knows how the FedEx Cup is structured.

“I’ve played the Tour Championship every year since 2010 and that’s something I’m proud of, and this year I’m outside of the bubble right now.

“It’s a great golf course. From my point of view, it’s going to be hopefully third time lucky here.”

Rose is currently 23.00 to win The Barclays, with world number one Jason Day leading the market at 8.00.