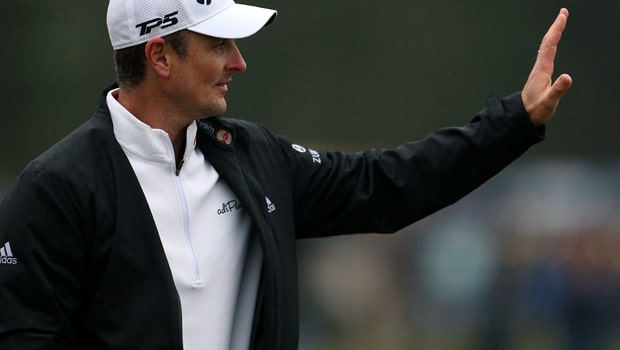 Justin Rose admitted to ‘almost’ feeling sorry for Eddie Pepperell after he turned around their clash at the WGC-Matchplay in Texas to eliminate his fellow Englishman.

Rose was three down with four holes to play but birdied the 15th, 17th and 18th to halve his match with Pepperell.

The Ryder Cup star rolled in a 30-foot birdie putt on the par-three 17th hole, just to keep the match alive.

Rose now maintains control of his own destiny going into the third and final day of round-robin matches, knowing he’ll advance to the last 16 with a victory over Gary Woodland on Friday in Austin. Pepperell meanwhile faces Emiliano Grillo, with both men already eliminated.

Former US Open winner Rose admitted to feeling some sympathy for Pepperell, who seemed to have the match in his grasp.

“I had a great match with Eddie. He’s such a class individual and a player to the point where you almost feel sorry for doing that to him over the last few holes,” he told Sky Sports.

It was a similar take of mixed feelings for Brandt Snedeker, who defeated Tiger Woods 2&1 in their clash. Woods will need to beat Patrick Cantlay on Friday and hope that Snedeker loses to Aaron Wise, if he’s to make the knockouts.

Snedeker admitted it was nice to get one over on the 14-time Major champion – though he quickly conceded that very few people would have been sharing in his joy.

“It’s good to finally get one against him. He’s beaten me about 10,000 times in my career,” Snedeker said.

“The crowd were all pulling for Tiger – I don’t blame them. I am, too, 100 per cent of the time – except for today. To be honest, I think my own kids were pulling for him.”