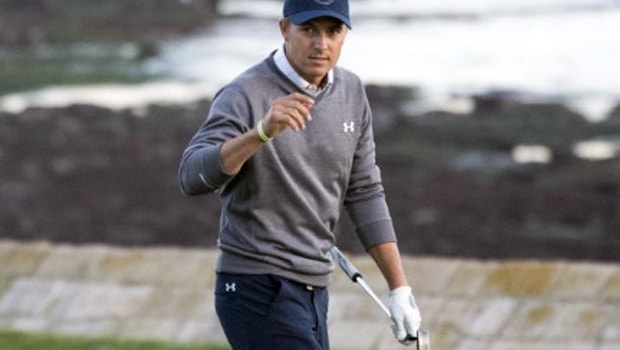 American Jordan Spieth moved closer to securing his first PGA Tour victory since May 2016 as he pulled six shots clear after the third day of the AT&T Pebble Beach Pro-Am.

The second round had to be concluded on Saturday morning after more bad weather and Spieth finished with a share of the lead.

He started his third effort on 10-under par alongside world number one Jason Day but the Australian soon tailed away after a horror start.

Day opened up with four bogeys and a double-bogey before making late birdies to sign for a 75, while Spieth produced some magical moments with the putter.

Spieth, 7.50 to win The Masters, eventually signed for a 65 to finish six shots in front of countryman Brandt Snedeker.

Snedeker’s 67 sees him sit one shot in front of Dustin Johnson and Kelly Kraft going into the final round, while Rob Oppenheim is all on his own in fifth.

Geoff Ogilvy, Derek Fathauer, Scott Stallings, Jon Rahm and Kevin Chappell are all fighting for a top five spot on eight-under in a tie for sixth, while Day sits in a share of 11th after his day to forget.

Spieth is expected to keep his cool on Sunday as he looks for yet another win on the PGA Tour, but he will need to watch out for Snedeker.

Snedeker has the 72-hole scoring record in this tournament and is confident of putting the leader under pressure on the final day.

He told the PGA tour.com: “I’ve got to go out there and make some birdies and put some pressure on him.

If you don’t get the first seven holes at Pebble, you’re going to have a long day, so I know what I have to do.

Jordan’s been playing great all year, I’ve seen it up close and personal.”