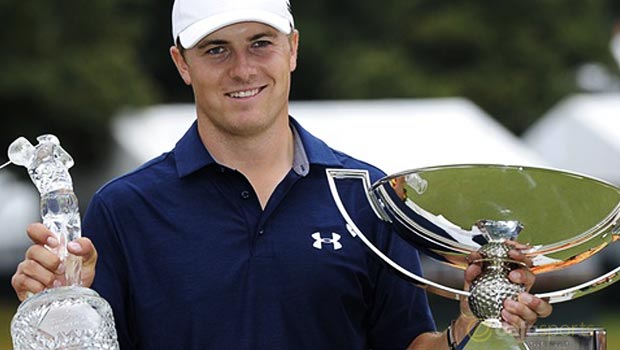 Jordan Spieth capped his amazing PGA Tour season by winning the Tour Championship in Atlanta and grabbing the FedEx Cup along with it.

The 22-year-old had two majors amongst his tally of five wins this season and he admits it will be tough to better his achievements next season but that is what he plans on doing.

A final round 69 was enough to ease Spieth to a four-shot victory at East Lake in the Tour Championship and afterwards he reflected on a remarkable season before turning his attention to improving again in 2016.

“This year is unreal. I don’t know how we sit down and figure out how to improve on it, but we are going to try to do that.”

Spieth recovered from missing the cut at the opening two FedEx playoff events to triumph in Atlanta and secure the $10m jackpot for winning the FedEx Cup.

He had arrived at East Lake on Monday of last week to prepare for the tournament and afterwards he revealed how he and his team had treated the Tour Championship like it was a major.

“We approached it as if it was a major and mentally stayed in it, even when I didn’t have my best ball striking,” said Spieth.

“I had missed two cuts in a row and I had never done that.

“I lost the number one ranking and I was watching Jason Day dominating golf. I got frustrated so I got to work, put my head down more than I had after the PGA (Championship), knowing we could still peak for this week and that’s what we did.”

Spieth will join his American teammates for the Presidents Cup in Korea next month where Jay Haas’ United States are 1.53 to win. Nick Price leads the Rest of The World team and they are 3.20 to prevail.