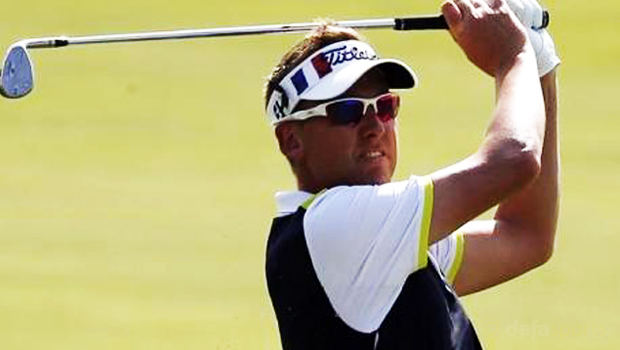 Ian Poulter moved into a four-way tie for the lead after the first round of the DP World Tour Championships after carding a six-under-par 66 on day one.

The Englishman was in impressive form at Jumeirah Golf Estates on Thursday as he shot six birdies in a bogey-free display to climb into a share of first place.

He could have snatched the outright lead on the 18th hole, but the 39-year-old, who will be pushing for a spot in Europe’s Ryder Cup team for the event at Hazeltine next year, slid his putt just past the left edge of the cup.

Nonetheless, it was still a brilliant opening round although Poulter felt his score could have been a lot better.

“I played well today, I came out and played pretty solid,” he told Sky Sports. “I didn’t take care of the par fives today. At the second I missed a relatively easy birdie putt and I just missed one at the last.

“So, although the round was good today at six-under, I am walking off the golf course a little disappointed.”

Australian Marcus Fraser, two-time major winner Martin Kaymer and Englishman Andy Sullivan are the other three players at the top of the leaderboard after rounds of 66.

Francesco Molinari, who has not won on the European Tour since 2012, is alone in fifth on -5 while there are eight players currently positioned on four-under.

One of those is former world number one Rory McIlroy after the Northern Irishman birdied the last – his fifth of the day – to move into a share of sixth.

The four-time major champion, who is expected to lead 2.10 outsiders Europe in the 2016 Ryder Cup against 1.91 favourites America, made just one bogey in a decent start to the tournament.