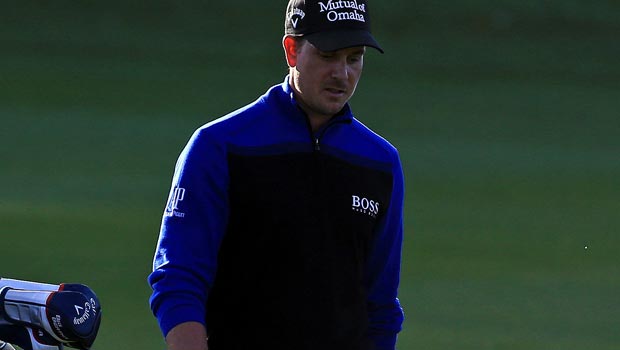 Henrik Stenson hopes to finish the European Tour season with a successful defence of his World Tour Championship title this week.

The 38-year-old won in Dubai 12 months ago when he beat Ian Poulter by six shots, becoming the first man to win the Race to Dubai on the European Tour and the PGA Tour’s FedEx Cup in the same year.

Rory McIlroy has already won the 2014 Race to Dubai but Stenson is second on the money list and the Swede will now look to break a career duck by defending a title for the first time.

“Last year was very special and I know it can’t be as special this year because Rory has already won the overall race,” Stenson told a pre-tournament press conference. “But I can make it a very special week for myself by playing well here and hopefully give myself a chance to win.

“I haven’t defended a title as of yet, so I couldn’t think of a much better place to do it than here this week.”

Stenson reached a career-high ranking of number two in the world in May and secured career-best finishes at the Masters, US Open and PGA Championship.

The world number four has not won a tournament in 2014 but is still pleased with his performances over the past year.

“I’m pretty pleased with the overall performance this year,” said Stenson. “It was always going to be a tough one and, especially early in the season, it was tough.”

He added: “I think I got close to 200 world ranking points on the board, which is always a good indicator for a strong season. It’s a win that’s missing and hopefully I can take the opportunity here.”

Stenson is priced at 8.50 to win the World Tour Championship, which begins on Thursday November 20.