Posted by Jason Stepford on September 7, 2018 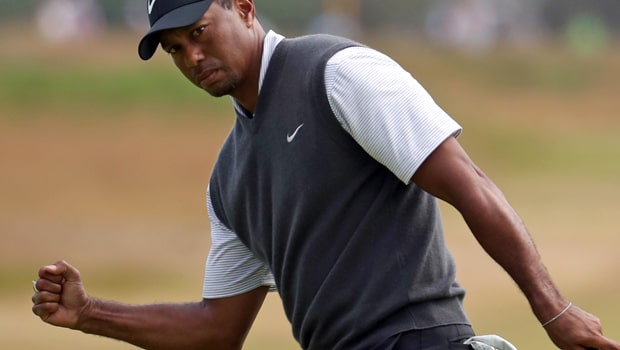 Tiger Woods brought an old friend to the BMW Championship in Pennsylvania and duly came within one stroke of equalling his career-low score on the PGA Tour.

The American teed-up on the Aronimink course in the rolling hills just west of Philadelphia with his trusted silver Scotty Cameron putter back in the bag.

The flat stick was in his hand for 13 of his 14 Major championship wins and Woods admitted that he has been toying with bringing it out all summer.

“This is something familiar. I know this putter,” Woods told Golf Channel.

“I’ve been monkeying around with it throughout the summer at home in the back yard and decided to put it back in the bag today.

“It felt good. My body remembers the feel of that putter and how it swings. Im just letting it rip on the greens.

“I made a few putts today, right out of the gate.”

Woods shot eight-under par to lead the tournament alongside Rory McIlroy after round one. The veteran needed just 27 putts on the rolling greens of Aronimink, while he didn’t miss a putt from inside 10-feet.

It wasn’t just the putter. Woods hit 16 greens-in-regulation, matching his season-high, with 13 of those approach shots halting within 20 feet of the target.

It all added up to be the second-best opening round of his career and leaves him in prime position to go after the PGA Tour win his season has demanded.

Woods and McIlroy are one shot clear of Xander Schauffele in third while Billy Horschel, Peter Uihlein, Alex Noren and Justin Thomas are all on six-under par.

Rickie Fowler (-5), Hideki Matsuyama (-4) as well as Jon Rahm, Justin Rose and Henrik Stenson (all -4) are within hailing distance of the pacesetting duo.

McIlroy is the 4.20 favourite to win the BMW Championship with Woods just behind at 4.30 after round one.