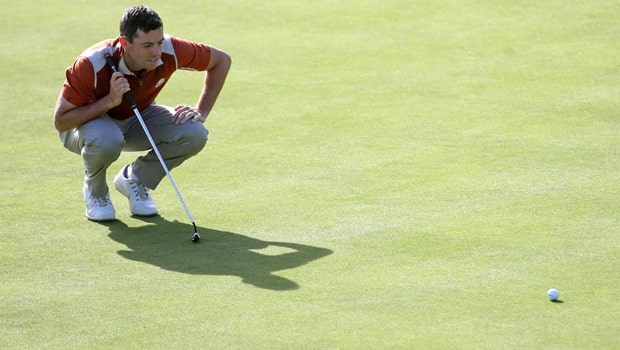 Rory McIlroy shares the lead at the Wells Fargo Championship after a five-under par first round.

McIlroy made five back-nine birdies to shoot 66 and share the first-round lead with Joel Dahmen, despite not being at his best.

He needed to scramble in some style at times for his pars, but the four-time Major winner is right in the mix at a tournament where he was excelled in the past with two wins.

The Northern Irishman admits that Quail Hollow always appeals as a course on which he can do well.

“Every time I step onto this golf course, I feel like I have chance to shoot a good score,” McIlroy said.

“I didn’t play my best today. I sort of managed my game well, scrambled well, but it added up to a good number at the end of the day.”

Patrick Reed and Martin Laird are amongst a five-way share of third spot behind the leading duo while Jason Day and Jason Dufner are in the group on three-under, one clear of the likes of Paul Casey, Webb Simpson and Sergio Garcia as 46 players are within four strokes of the lead.

McIlroy has been in outstanding form so far in 2019, with a string of top-five finishes accompanying his Players Championship win in March.

He failed to get in the mix last month at The Masters however and is already acutely aware he needs to do better next month when the US Open returns to iconic Pebble Beach. The 2011 winner at Congressional CC in Washington, McIlroy has not enjoyed much US Open success lately.

“I’ve been pathetic at the US Open, so I’ve changed that up, I’m going to make that my third week in a row. I’ve had three missed cuts in a row, it is pathetic,” he said.

“I don’t view it as just ‘this big week’, it’s a stretch of golf coming up and I’m excited about that.”

McIlroy is 2.75 to win the Wells Fargo Championship this week, while he’s 10.00 for US Open joy next month at Pebble Beach.