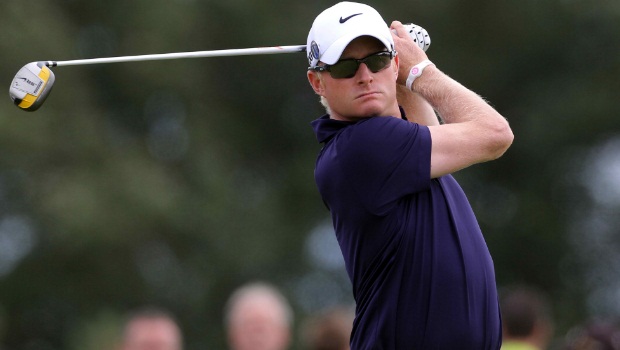 Simon Dyson was disqualified ahead of his third round at the Shanghai Masters with Rafael Cabrera-Bello and Luke Guthrie now sharing the lead on -8 with one round to go.

Dyson was just four shots off the pace following back-to-back rounds of 70 at Lake Malaren but he fell foul of the rules and did not tee off on Saturday.

The 35-year-old was seen to tap down a spot on the green between his ball and the hole on the eighth hole of his second round and should have been penalised two shots for the infringement.

But the Yorkshireman was oblivious to his actions and therefore signed for the wrong score after his round, with members of the public calling in to point out the indiscretion to European Tour officials.

On the course Cabrera-Bello was a big mover and he carded five birdies in an error-free round to join Guthrie in top spot.

US star Guthrie was four clear at the halfway point but his level dropped on Saturday, with four birdies and four bogeys.

With just 18 holes to play there are plenty of contenders for the title as another Spaniard, Gonzalo Fernandez-Castano, also shot a 67 to move into third place on seven under.

Frenchman Gregory Bourdy secured five birdies in a bogey-free round as he signed for a 67 as well to sit on -6 in the Far East.

Paul Casey, Scott Jamieson and Craig Lee all went round in one-under-par and the trio share fifth place on five-under-par, with Pablo Larrazabal and Thongchai Jaidee of Thailand just one shot further back.

Lee Westwood and in-form American Peter Uihlein are in a group of four players on -3 while Rory McIlroy spoiled what looked set to be a decent round with a double bogey on the 18th to slip back to -2.