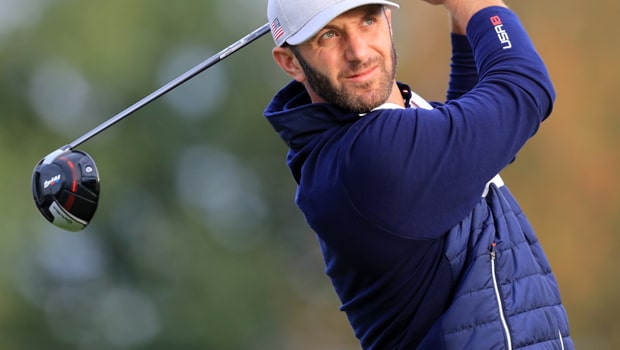 World number one Dustin Johnson says he is enjoying himself as he leads the RBC Heritage by one shot ahead of Sunday’s final round.

Sceptics had played down Johnson’s chances this week due to the shorter course in South Carolina, but he has shown tremendous ball-positioning this week.

Johnson will start Sunday’s round on 10-under par thanks to his third-round 68, matching his opening effort at Harbour Town. He is now one shot clear of Ian Poulter, Rory Sabbatini and Shane Lowry.

Poulter at 6.50 could be his biggest threat as the Englishman demonstrated his quality at last week’s Masters tournament at Augusta National.

Johnson showed signs of crumbling during his last few holes as he bogeyed two of his last three at Hilton Head.

When asked about his round, he told the PGA Tour: “I think I have been driving it well. That’s a big key around here.

The wind direction was a lot different than it has been the last two days. The course played very difficult, especially the last three holes. It was hard to make putts.

It’s something I look forward to now. We have a really big fan base here and growing up in South Carolina definitely helps.”

Johnson is now 2.25 to win the tournament, while there are still a number of players who will fancy their chances.

American pair Patrick Cantlay and Scott Piercy are among a group of six players sitting two strokes off the pace and 19 players will start the final round within four shots of the lead.

Cantlay is 9.50 to lift the trophy, while Sabbatini is 13.00 to win his seventh tournament on the PGA Tour.