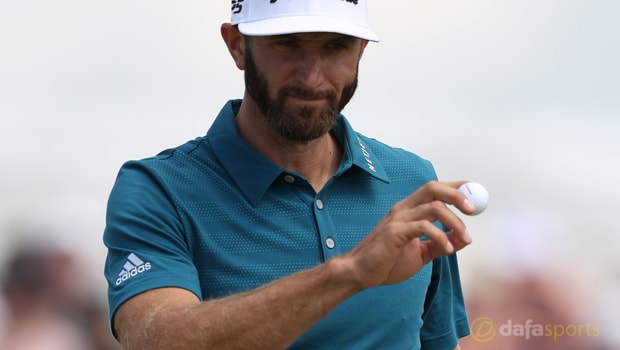 Dustin Johnson is part of a six-way tie at the top of the leaderboard after he carded an unblemished round of 66 on the opening day of The Players Championship.

The American, who is bidding to retain his spot at the top of the world rankings, what at his dominant best at TPC at Sawgrass, finding 17 greens in regulation and converting six birdie opportunities as he moved onto six-under-par for the tournament.

The 33-year-old has never previously finished higher than 12th at golf’s ‘fifth major’ but he appears well placed to better that record this year and he was certainly happy to produce a strong opening round on a course he enjoys playing at.

“I haven’t had the best record here, but it’s a golf course that I like, I enjoy playing and I feel like I should play well here,” he said.

“I think a lot of it has to do with putting. I don’t think I putted very well around here, that’s one thing I’ve struggled with and obviously today I rolled it nicely.”

Johnson is joined at the top of the leaderboard by compatriots Webb Simpson, Matt Kuchar, Chesson Hadley and Patrick Cantlay, while Swede Alex Noren is the only non-American that holds a share of the lead.

A number of big names are within striking distance heading into Friday’s action, including Englishman Justin Rose, who is two shots off the pace and is one of the players who could overtake Johnson at the top of the world rankings if he were to secure overall glory come Sunday.

Johnson, who is himself priced at 6.00 to win the tournament, has held the world number one spot for 64 weeks and he is determined to hold on to that position for at least a little bit longer.

He added: “Every week I know there’s a chance that someone can pass me. I definitely want to stay there.”