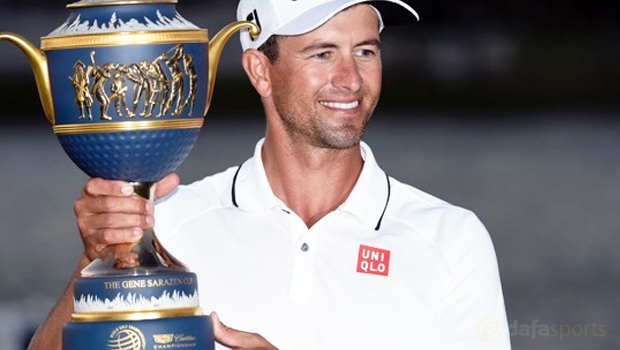 Adam Scott reflected on a ‘wild’ Sunday at Doral that ended with a one-shot victory in the WGC Cadillac Championship before insisting he wants to use the win to build momentum for the US Masters.

The Australian survived two double-bogeys in his opening six holes in Florida during the final round to make a strong push back up the leaderboard and hold off Bubba Watson by a single shot.

Scott, who twice found water in those opening six holes, appeared destined for a watery grave with his approach to the final green but his ball somehow stayed dry.

Pitching from inside the hazard line, Scott produced a sublime up-and-down to deny Watson a playoff.

Overnight leader Rory McIlroy endured a torturous day at Doral as he carded a 74 to finish tied-third with Danny Willett having allowed his three-shot lead to disappear.

Scott was at a loss to explain how he got the job done, but a run of six birdies in nine holes from the 6th were almost certainly the catalyst for a remarkable win.

“I don’t really know. This is such a wild golf course in conditions like the wind was,” he told reporters.

“I made a couple of horrible errors on the front nine but you can’t give up hope and I thought if I can get a couple [of birdies] before the turn, maybe a great back nine is good enough if things go my way and they did somehow. It was messy and my golf wasn’t that pretty either.”

Scott landed the Green Jacket at Augusta in 2013 and, having won back-to-back PGA Tour events following his Honda Classic success, he now has form figures of T2-1-1 after being denied at Riviera by Watson.

With the Masters now only a month away, Scott is hoping he can hold his form through until Augusta.

“I can’t believe I have won back to back weeks out here and to win a WGC is huge,” he added.

“Somehow I need to bottle this up and keep it another four or five weeks through the Masters and that would be amazing to get myself into contention there and have a chance.”

Scott is 13.00 to win the Masters while two-time Green Jacket winner Watson is also now 13.00 for the season’s opening major.