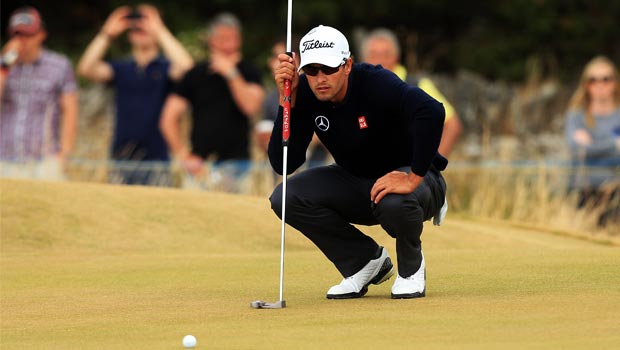 US Masters champion Adam Scott says this year’s event will miss the injured Tiger Woods but he would have no qualms about taking the American’s world number one ranking.

“It’s a big loss for the tournament any time a world No. 1 is not going to play,” said Scott. “It’s a huge loss.

“But it’s the nature of sports, guys get injured. It’s going to be missing the top player in the game this week but, as every year here, this event produces something special no matter what.

“It just has a way of doing it. It’s not going to involve Tiger this year, but it will involve someone else and it will be a memorable event anyway.”

The Australian is now seen as the man to beat by everyone else in the Masters field, although he starts as the 11.00 second favourite behind Northern Irishman Rory McIlroy, 10.00 in the betting.

“I think in the past certainly it has been easy to go to events and look at a guy who is the one to beat,” added Scott.

“I think that scope has kind of broadened now. There’s a lot of guys with the talent and the form that aren’t necessarily standing out above others, but on their week, they are going to be tough to beat.”

Scott admits the prospect of taking the injured Woods’s number one status excites him and doesn’t shy away from talking about it.

“There’s absolutely motivation for that,” he told The Guardian. “But the motivation is just to play well. I feel like my game is at a point where if I play well, I have got a chance to win this tournament.
That’s my goal this week. And the follow on from that would be world No1.

“If I can keep chipping away at it, whether I win or not this week and get to No1, my goal is just to keep playing well.

Scott, as defending champion, was granted the privilege of playing Augusta with his father, Phil, last weekend and loves the course.

His record in the event is impressive too, having finished tied second and tied eighth in the two years just prior to his 2013 victory in a play-off with Angel Cabrera.