Valtteri Bottas: Williams must go all out 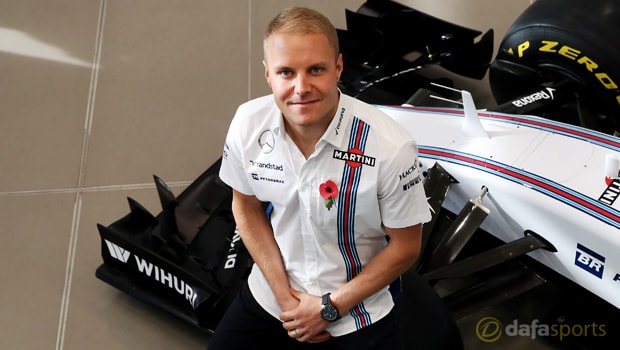 Valtteri Bottas says that Williams must go all out and fully commit itself to try and catch Force India in the Constructors’ Championship after falling away in Brazil.

Williams head into the final event the of the campaign in Abu Dhabi sitting 28 points adrift of fourth-placed Force India.

The last outing at the Brazil Grand Prix saw the Grove-based outfit make a number of mistakes which allowed Force India to extend their lead in the Championship.

Bottas finished 11th with team mate Felipe Massa crashing out in front of his home fan in wet and difficult conditions.

Force India saw Sergio Perez claim fourth place and Nico Hulkenberg came home in seventh as they look for a strong end to the campaign.

Finland’s Bottas has called on the team to throw everything at their rivals for the final event of 2016 as he holds on to the slim hope of finishing fourth.

Bottas said: “We must just go for it! It’s the last race, we have nothing to lose.

“We obviously will have nothing new in the car, normally it should be a better track for us and, at least, it should also be dry.”

Bottas felt that Force India found some luck last time out at Interlagos, while he also admitted it was unfortunate for Massa to crash out on his final appearance at home.

He added: “It is disappointing, they [Force India] had a very good race, they had a good strategy and you also need a bit of luck in these conditions, this kind of say.

“It wasn’t our day and it was also a shame for Felipe that his last home race finished like this, but I’m sure he still got a pretty warm cheer from the fans.”