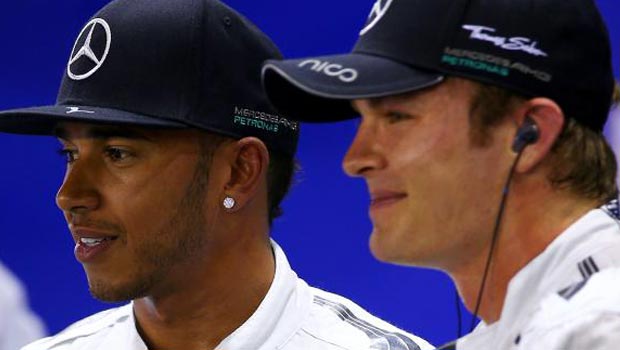 Lewis Hamilton has given himself a huge boost going into Sunday’s Singapore Grand Prix by snatching pole position from title rival and team-mate Nico Rosberg in a thrilling qualifying session on Saturday.

Mercedes were made to work hard for their one-two on the front row but ultimately achieved their goal, with Hamilton – the 1.70 favourite to take the chequered flag – holding the early advantage going into Sunday’s race by edging out the championship leader by just 0.007 seconds.

Although it’s not the first one-two for the Silver Arrows, the nature of the qualifying session suggests that the race itself will be no foregone conclusion with Red Bull, Ferrari and Williams ready to challenge this season’s established order.

Daniel Ricciardo will be looking to close the gap on the leaders in the standings from third on the grid, one place better off than Red Bull team-mate Sebastian Vettel, while Fernando Alonso of Ferrari will line up in fifth.

Williams’ Felipe Massa will start the race from sixth ahead of the other Ferrari of Kimi Raikkonen and team-mate Valtteri Bottas, with McLaren’s Kevin Magnussen and Daniil Kyvat of Toro Rosso making up the top ten.

Hamilton finds himself 22 points behind Rosberg in the standings but will now hope he can use the advantage of pole position to good effect when it matters.

“That’s probably the most exciting qualifying session I’ve had for a long time,” said Hamilton. “Where there’s a lot of people in the mix and you have to be spot on.”

“I guess no-one was expecting to see how close everyone was. I saw the Ferraris very close and for it to end up as it did is great for our team.

“The last lap I locked up into turn one and lost quite a bit of time but managed to pull it back. I lost 0.15-0.2secs but I kept going and it got better and better on that lap. It ended up very close.”