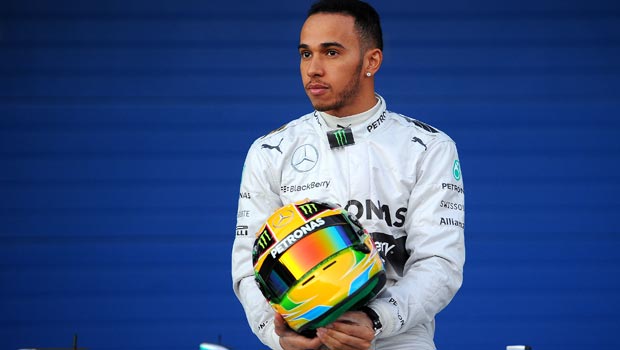 Lewis Hamilton has accepted that he will start the Chinese Grand Prix as a strong favourite at 1.45 in the race betting and knows that Sunday’s race is ‘mine to lose’.

Mercedes have made a dominant start to the season and there was no let-up from Hamilton as he looks to win a third successive grand prix race for the first time in his career, putting in a scintillating performance in the wet conditions at the Shanghai International Circuit to secure his 34th pole position.

Team boss Toto Wolff insisted Hamilton was ‘in a league of his own’
after the 29-year-old moved clear of Jim Clark as Britain’s most successful pole winner, and into fourth in the all-time list behind only Michael Schumacher, Ayrton Senna and Sebastian Vettel.

Hamilton was understandably delighted to make British Formula One history but insists there is plenty more to come from him.

“To have had so much success already at such an early stage with them, it’s an incredible feeling,” Hamilton said.

“And to be up there amongst the greats, I’m very proud of that. To have passed Jim Clark’s record, it’s unbelievable, so I’m very grateful for that.”

Claiming pole is only part of the job, and Hamilton appears confident of taking control of the Drivers’ Championship by taking the chequered flag on Sunday.

“It is mine to lose,” Hamilton added. “I just need to make sure I get a good night’s rest and focus.

“There are always areas you can improve so I will try to do that.”

The 2008 champion finished six tenths of a second clear of Red Bull’s Daniel Ricciardo with Sebastian Vettel a further half a second back in third.

However, it is Nico Rosberg who is still seen as the biggest threat to Hamilton’s hat-trick of race wins.

The current championship leader, who was 1.3 seconds slower that Hamilton in qualifying, is priced at 5.50 to win in China, with Ricciardo on offer at 8.00 and Vettel at 9.00.