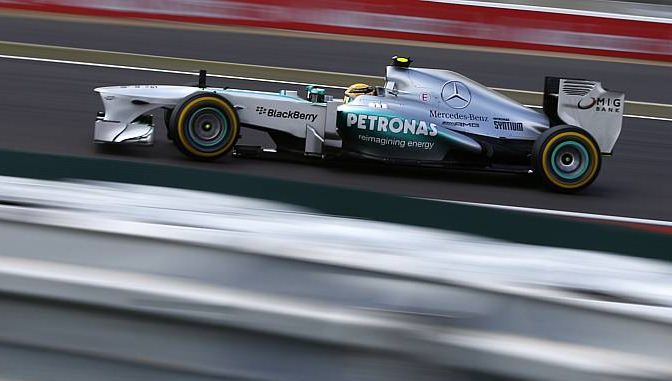 Lewis Hamilton believes he is still some way from his first win with Mercedes after finishing fifth in German Grand Prix on Sunday and ruled out a title challenge.

Hamilton started on pole but was again hit by the tyre problems that have dogged Mercedes for most of the year.

Hamilton was denied the chance to win the British Grand Prix the weekend before after suffering tyre failure and he admits at the moment he cannot see where the next win is coming from.

“It would be good to get a win but at the moment it really doesn’t feel like it’s going to happen,” Hamilton said.

“Luck is definitely not with me but who knows? At some stage it’s got to come.”

Team-mate Nico Rosberg, who won at Silverstone, finished behind Hamilton in ninth but the Englishman took no satisfaction in that whatsoever and will not be happy until he starts winning.

“I don’t feel like it’s a boost or anything like that,” he said. “Having the edge on him; everyone expects that.

Hamilton is now 58 points behind World Drivers’ Championship leader Sebastian Vettel, who won on home soil in Germany, and says there is no point even thinking about making a challenge with 10 races to go.

“I’m not even thinking about the championship,” he said. “There’s no point when he’s almost 60 points ahead.

“It’s going to take a lot of good opportunities to come my way. We’re going to need a lot of hard work, a little bit of luck on our side, a bit of elbow grease and we might be able to do it. But who knows?”